Apple (AAPL) has been trading within a series of Fibonacci retracement lines for over a year. The 2012/2013 decline in the stock price ended in the area of a 50% retracement of the 2009 low and 2012 high, and the 62% level acted as resistance for several months. The subsequent breakout took it back up to a 62% retracement of the 2012/2013 range, and the stock has since been reverting around that 50% retracement level. The company reports earnings after the close today and with Bollinger bandwidth tightly compressed (graph at the bottom of the chart) there is the potential for a volatile move. Monitor the retracement levels going forward for areas of support and resistance.
I have no position in AAPL. 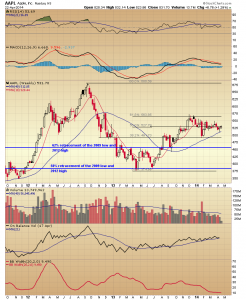