The well-choreographed and broad based reversal on Monday came at a point in time and price when the major indices were testing key moving averages and a number of high profile stocks were at or near important levels of support. If those levels had been breached the charts would have suffered severe technical damage, and created the potential for aggressive selling. The algorithmic machinations may continue into the end of the week as we close out the month, and if they do they will help to refurbish the appearance of the intermediate and long term charts.
So, mechanical or not was this technical buying at sound levels of support or was there an ulterior motive? The motive suggested being – supporting the market on the surface while distribution takes place underneath the surface.
The weekly SPY chart shows the continued move higher this year with the MacD in bearish divergence to price. At the bottom of the chart is the Chaikin money flow indicator, which is a measure of accumulation/distribution over a specific look-back period, and it reflects a recent sharp drop-off in positive money flow. 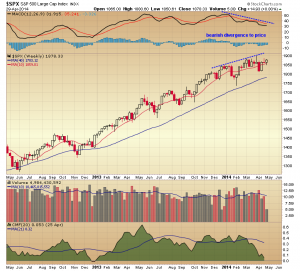 At the bottom of the daily chart is a graph that shows the percent difference between daily volume and the 50 day moving average of volume. Even during the rise in price two weeks ago off the 50% Fibonacci retracement level volume was well below average, and yesterday’s session saw volume about 27% below the 50 day average of volume. 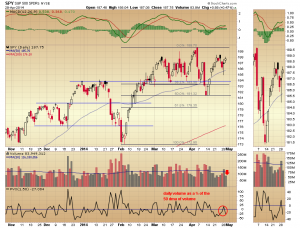 Continuing negative money flow interrupted by low volume moves to stabilize and support the market is a suspect combination. I am not a conspiracy theorist, but I am long the SDS.