The weekly index charts continue to look strong after breaking through resistance and closing near their highs. But there is always something to lean negative about if you look hard enough. Can you see the potential head and shoulders top on the Russell 2000 index? 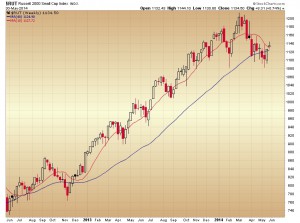 Every trader carries some emotional baggage that can influence their strategies. Follow the charts and not your heart.

On May 14th I noted that the 10 year treasury yield was breaking down from a channel consolidation pattern, that projected to the 2.40% area. It’s reached that target, which is also the 38% retracement level of the 2012 low and the 2013 high, and a good technical level for a bounce or more consolidation. 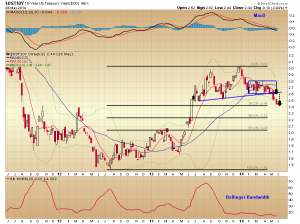 I keep one eye on Disney (DIS) and the other on MMM (MMM) as proxies for the broader market. Disney is completing a rounded bottom continuation formation and MMM is trending higher after a mild pullback in April, and a bounce off its 50 day moving average. Keep both eyes on these guys for some market context. 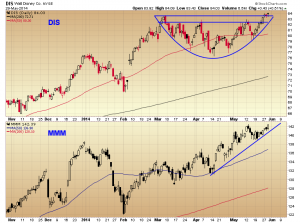 Taking a look at your chart requests, comments, and suggestions this weekend. Send them along to www.rightviewtrading.com

Tesla (TSLA) is hanging in above its 50 day moving average and the 38% retracement level of the December 2013 low and the February 2014 high. The question is: is the stock spinning it wheels or gaining traction?

Shares of Dollar General (DG) have come off over 14% from their January high, making a series of lower highs and lower lows in a declining triangle pattern. Today the stock is breaking through the lower end of the triangle and the 38% retracement level of the 2013 low and 2014 high. The indicators have rolled over again and the next level of technical support is the 50% retracement level. 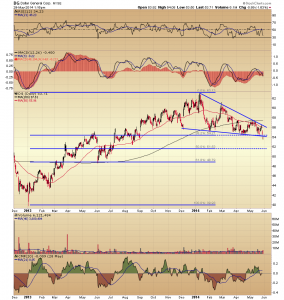 Shares of IAC/InterActiveCorp (IACI) corrected more than 20% after making new highs in March this year. The stock returned to its 200 day moving average and filled a gap from late last year. This week it broke above the downtrend line established by the decline and returned into upper Bollinger band range. The MacD has made a bullish crossover, the RSI is back above its centerline, and money flow is positive. Volume needs to improve and the stock may have to do some basing before it continues higher, but it seems to be taking some first steps on the road to recovery. 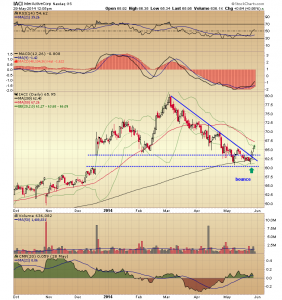 Shares of Exxon Mobil (XOM) were down fractionally yesterday but formed a very weak gravestone-like doji candle on the daily chart. This candle has a narrow opening and closing range near the bottom of its overall range, and suggests attempts to move higher have been rejected. The candle broke the support line of a three month rising channel. Price momentum indicators have rolled over and the money flow index, a volume weighted relative strength measure, has dropped sharply over the last week. It looks like the next level of support to be tested is the intersection of the 2013 former resistance-turned-support high, and the uptrend line drawn off the February/March lows. 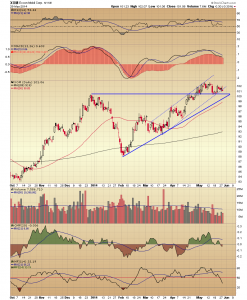 The technology is awesome and will, at some point in the future, change the course of ground transportation. Google’s first fully autonomous motor vehicle is just one more example of the genius that is at the core of the company.
That all said, the car looks like it drove (on its own) right out of an animated Disney movie, or maybe something that 15 or 20 folks with floppy shoes and large red noses might exit.
I know geek is the new cool and form follows function, but style isn’t dead either. 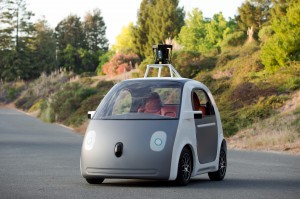