David Tepper’s Appaloosa Management sold its position in Fluor Corporation (FLR) last quarter. It had accounted for 1.23% of Appaloosa’s total 4Q portfolio. The stock has been making a series of lower highs since the beginning of the year above a base in the $73.00 to $74.00 range. These highs have been marked by high wick candles that formed in a down trending zone of resistance. It will be interesting to see if another high wick candle forms in the zone. If one does it would be a highly speculative short opportunity for aggressive traders. 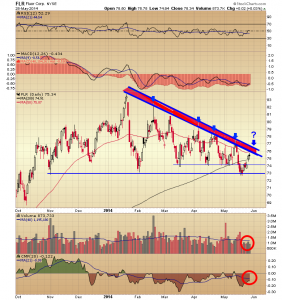 The Currency Shares Euro Trust (FXE) dropped below its 200 day moving average last week and an uptrend line on the weekly chart in place for about a year. Money flow turned negative in the beginning of April and this month the RSI crossed below its centerline. Average true range and the Bollinger bandwidth indicator, overlaid on the graph at the bottom of the chart, reflect very tight price range compression, which often precedes volatile moves. At its current level the FXE offers a good risk/reward short trade, with an initial buy-to-cover stop above the 10 week moving average. Remember though, volatility can work both ways, and capital preservation is the prime directive. 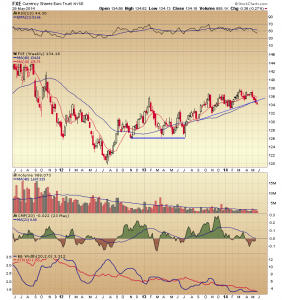 The weekly chart of Wal-Mart (WMT) shows the stock tracking above an uptrend line for the last two years. There are, however, signs of waning momentum. The trajectory of the stock price is flattening as the range between highs and the support line narrows. Chaikin money flow turned negative in March, and the MacD is in bearish divergence, but it’s been like that for the entire period. Should the stock continue to decelerate, the zone marked by the last swing low and the uptrend line will be key support. 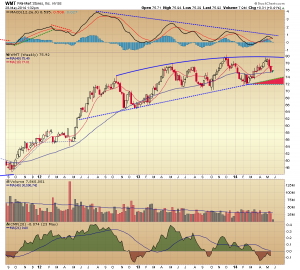 The SPY is holding above the four day rising trend line. The question is: If it fails will it move to fill yesterday’s gap open?

Shares of Salesforce.com (CRM) are up against an area of reinforced resistance on the daily chart. After bouncing off the 62% retracement level of its 2013 low and 2014 high in April, the stock made a series of higher lows just below the 200 day moving average, forming a small rising channel. It’s testing channel resistance again, which is now part of a confluence of resistance made up of the 38% retracement level, the 200 and 50 day moving averages, and a downtrend line drawn off the March/April highs, all situated in the $55.00 area.
The MacD made a bullish crossover and the RSI and Chaikin money flow are above their centerlines, but the stock has to prove itself at this point, with a strong move and a solid close in upper candle range above this dense intersection of resistance.

Cognex (CGNX) manufactures visual screening equipment that facilitates automation tasks. Over the last three months the stock formed a rudimentary inverse head and shoulders pattern above its 200 day moving average and broke above a downtrend line today. The MacD and RSI have been in bullish divergence during the consolidation process, but money flow is still negative.
The pattern projects a target price back to the February highs and with a stop below the intersection of the 50 and 200 day moving averages, the trade offers a good risk/reward ratio. 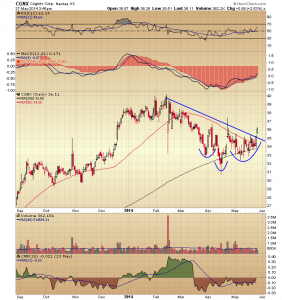 I am long CGNX.

Nice follow-through in the major indices today, but volume remains an issue. The SPY chart (checkout the weekend analysis of the S&P 500) shows the positive price action and the decline in volume. It remains at about 30% below the 50 day moving average of volume. Money flow as a percentage of that weak volume is, obviously, still very positive.

Cepheid (CPHD) manufactures molecular diagnostic testing systems. The stock recently retested the 62% retracement level of its July 2013 low and March 2014 high. Today it is breaking out of a consolidation channel it’s been in for the last month, and moving above channel resistance at the 50% retracement level. The MacD has made a bullish crossover and the RSI and money flow indicators are above their centerlines.
There is a 16% short interest in the stock and continued strength could trigger a short covering rally. 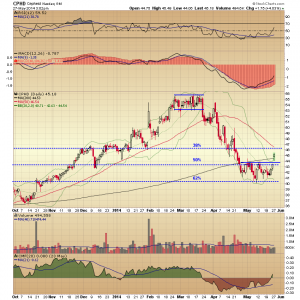 I am long CPHD.

These stocks came off a screen for potential squeeze play candidates.

The GLD has dropped through the triangle pattern support highlighted here last week. 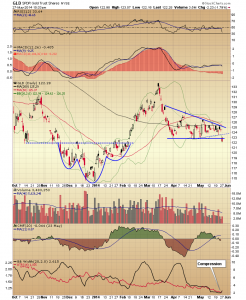