Buck asked if I’d take a look at the SPDR Gold Shares Trust (GLD) and the iShares Silver Trust (SLV) charts.
The weekly chart of the GLD shows the price action in late 2011 and through 2012 forming a large triangle pattern. Support was broken in April 2013 and the subsequent decline met the target price projection of the pattern which was also a 62% Fibonacci retracement of the 2008 low and the 2011 high. It has since been trading in a smaller triangle or fractal iteration of the larger formation, above $115 support and below a downtrend line drawn off the 2013 and 2014 highs. The MacD and Chaikin Money Flow have been in bullish divergence to price, reflecting positive momentum and accumulation. A successful breakout from the smaller triangle pattern projects back up above the larger triangle base. 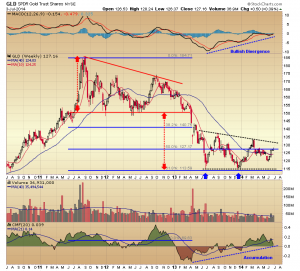 The SLV chart is similar to the GLD chart, but the more dominant multi-year pattern may be a horizontal channel and not a triangle, which more accurately projects to the base established in the $118.00 area over the last year. During this consolidation process another small triangle pattern formed and the downtrend resistance line is being tested this month. Again, the MacD is in bullish divergence to price and there is improving positive money flow. A successful breakout from the smaller triangle pattern projects up to and fills the 2013 April gap. 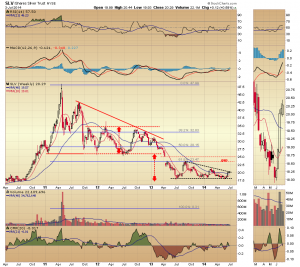