The Russell 2000 was the hardest hit of the indices today, down 1.7% in the session. In 2013 it broke above two year triangle resistance and spent the rest of that year making a series of higher highs and higher lows in a rising channel. It has spent the first half of this year moving within a wide horizontal channel.

The daily chart shows what appears to be rejection after a recent retest of channel resistance, and the internal uptrend line similar to the previous downtrend line is short term support. Price momentum indicators are rolling over and it looks like there might be another cycle of reversion in the pattern. 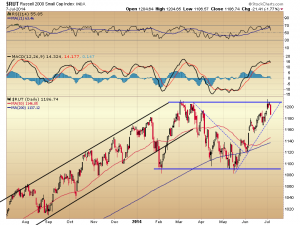