Shares of the SPR Gold Trust Shares (GLD) were up 0.61% today, while those of the Market Vectors Gold Miners (GDX) rallied 2.5% in the session. The GDX also broke above a downtrend line drawn off the August 2013 and March 2014 highs, and last month the 50 day moving average made a golden cross above the 200 day average, but the RSI is nearing an overbought condition and the MacD is attempting a bearish crossover. So, the technicals are conflicted, but the divergence is interesting, and the downtrend line should act as an initial level of support. 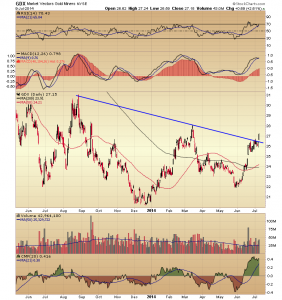