The Russell 2000 (RUT) and the NASDAQ (COMP) took a hit yesterday down 1.2% and 1.4% respectively, while the Dow (DJIA) and the S&P 500 (SPX) both saw more modest 0.70% losses. At the low point in the session, with the VIX above 12.5, there was a scent of fear in the markets, but the indices managed a bit of a bounce and the VIX was able to move just back below the 12 level. So, is this the start of a pullback or a bounce back? The daily charts of the major indices provide some important technical levels to monitor in the short term that could provide the answer.
The DOW has been trading in a rising triangle pattern with the uptrend line of the pattern supplying support in the 16,845 area; the S&P 500 has been trading in a narrow rising channel for the last month, and the support line is merging with an uptrend line drawn off the April and May lows at around 1955; yesterday the NAZ decline held right at its 4372 March highs. These areas of support also coincide with the 20 day moving averages (center Bollinger band lines) and could support, at least a short term bounce. (If the S&P were to continue lower, I speculated on a pullback target based off the weekly chart, yesterday.) The RUT saw less of a decline than the NAZ yesterday but the technical damage was more severe. It broke an uptrend line drawn off the May/June lows and its 20 day average. Here’s a piece I did on the NAZ on Tuesday. 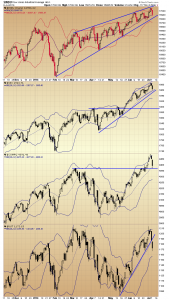 Is the RUT leading the way and the rest of the major indices set to fail and follow, or will the potential for a bounce be realized and the uptrend in the broader market resume? These levels and the 20 day moving averages will be where the secret is revealed. Patience pays.

One thought on “Pullback or Bounce Back ?”