Yesterday, I looked at the major averages in “Pullback or Bounce Back,” and asked the question: “Is the RUT leading the way and the rest of the major indices set to fail and follow, or will the potential for a bounce be realized and the uptrend in the broader market resume? These levels and the 20 day moving averages will be where the secret is revealed. Patience pays.”
The indices penetrated those support levels early in the session, then bounced sharply back above them, with the RUT finding some stability at its lower Bollinger band and 100 day moving average. The DOW and the S&P 500 have formed clear hammer candles, and the NAZ a large white candle, very positive one day price action. The RUT managed a spinning top candle, defined by a narrow opening and closing range in the center of its overall range, which reflects indecision, but as I said, it did form at the lower BBand and a key moving average. 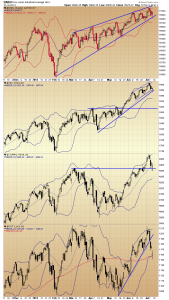 The weekly chart at this point does not look as positive, but there is one trading day left before the candles mature. Strong follow-through buying tomorrow that formed hammers on this timeframe would be a bullish sign, and while it would not necessarily signal its time to go all in, it would help dissipate the first whiffs of fear that have drifted into the marketplace.

Speaking of fear, we should not forget that the VIX is up 22% percent this week and above an important technical zone. I highlighted this level in detail on Tuesday in this piece.

So, important levels of support were severely tested today and held, and positive candles formed on the daily charts. As it always is, follow-through is key and will be needed to change the complexion of the weekly timeframe. One day of price action is not a reason to make a major directional trade. Be patient.

One thought on “Update on the Major Indices”