There was some positive price action on the daily charts of the major indices into the end of last week. The DJIA formed two hammer candles at the merge of its 20 day moving average and the uptrend line drawn off the lows of the last five months. The S&P 500 held at a very similar technical location, while the NAZ found support at its March high and 20 period Bollinger band centerline. The RUT broke through an uptrend line earlier in the week, but did manage to hold at its 100 day moving average and lower Bollinger band, at least for now. 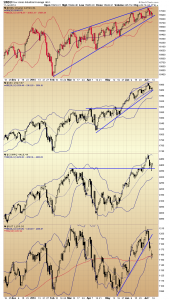 The hammer candles we were hoping would form on the weekly charts materialized on all but the RUT chart, in fact that chart looks vulnerable, with the close near lower candle range just above a confluence of technical support.
Futures are up this morning and three of the four charts of the major indices look good, that’s a acceptable way to start the week. As always, any questions or thoughts on stocks or stock charts, send them along to rob@rightviewtrading.com. Preserve capital and trade well. 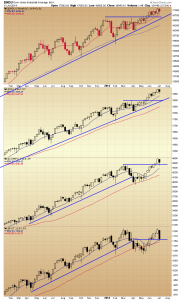