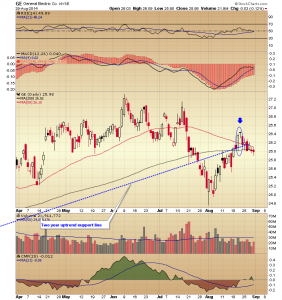 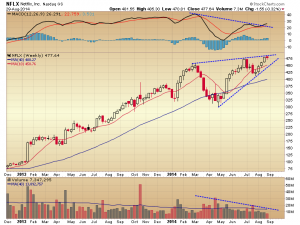 A large ascending triangle has been forming on the weekly chart of Netflix (NFLX) for most of the year. The trend is obviously higher, but the MacD is in bearish divergence to price and volume is dropping off. The pattern has the potential for a large move. Let it play out either to the upside or downside, and look for an increase in volume for confirmation. 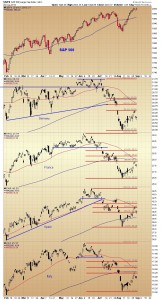 Here are two stocks in the fertilizer space that are testing important technical levels and have good price momentum and positive money flow. 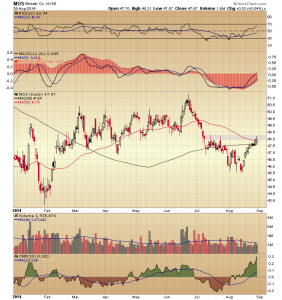 The daily chart of Mosaic (MOS) shows the stock pressing a zone in the $48.00 to $48.25 area after holding above the confluence of its 50 and 200 day moving averages. A close in upper candle range above this level would be a good long entry point with an initial percentage stop under the averages. 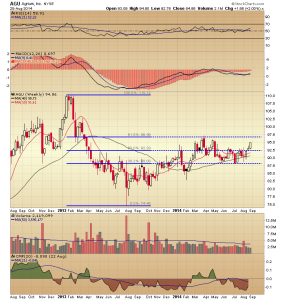 Shares of Agrium (AGU) have been trading within the parameters of the Bollinger bands measured off their 2013 high and low. The weekly price momentum and money flow indicators are following in the direction of the daily indicators which are all solidly positive. A close in upper candle range on this timeframe is a long entry point wit a position size that allows for a stop under the 40 week (200 day) moving average.

Shares of Goldman Sachs (GS) broke above their July highs earlier this week and are retesting that level in today’s session. A small hammer candle is forming on the daily chart at the former-resistance-turned-support level. If this level is maintained it could initiate the start of another advance in the swing step price movement of the last three months. Continued strength in the financials would be a reinforcing factor for the broader market. 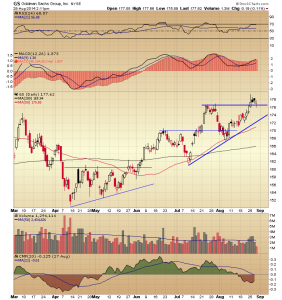 This is a weekly chart of the US Dollar Index ($USD) and while the most recent candle is not completely matured, note how the Fibonacci retraement levels drawn off the 2010 high and the 2011 low have helped define areas of support and resistance. 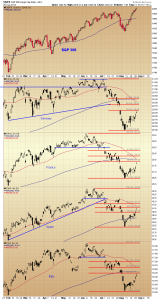 Here are three stocks I’m watching, that have been consolidating in triangle patterns and have positive price momentum indications and improving money flow. 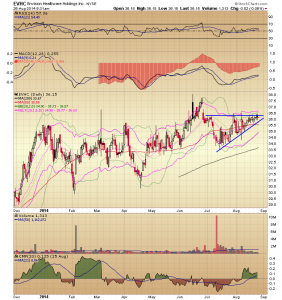 Envision Healthcare Holdings (EVHC) has been making higher lows for the last two months, but has been unable to break above the $36.50 level. The relative strength index and MacD are tracking above their centerlines, and Chaikin money flow reflects accumulation. A squeeze condition is in place, as defined by the Bollinger bands, a measure of deviation around a moving average, moving inside the Keltner channels, a measure of deviation around average true range. 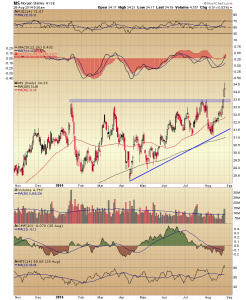 Shares of Morgan Stanley (MS) broke above larger triangle resistance and made a new high for the year. The MacD has made a bullish crossover and Chaikin money flow is above its 21 period average, which I use as a signal line. The relative strength indicator and the money flow index, a volume-weighted relative strength measure, are nearing overbought conditions. The stock offers a good risk/reward long entry point at its current level, but the oscillators hint that it might, also, want to retest the upper end of the triangle. 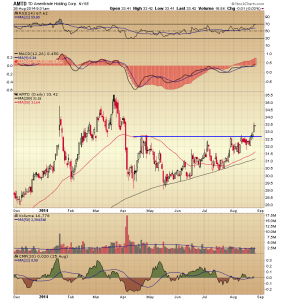 TD Ameritrade Holding (AMTD) has been advancing above the support of its 200 day moving average, and below resistance in the $32.70 area. This stock broke above triangle resistance this week, and remains a good/risk reward long at its current level. To maintain its momentum, however, volume and positive money flow will need to improve. 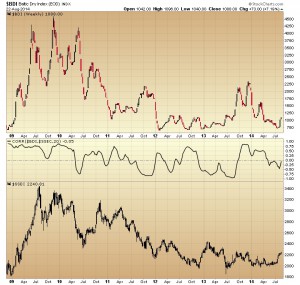 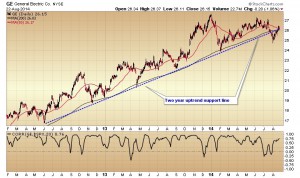 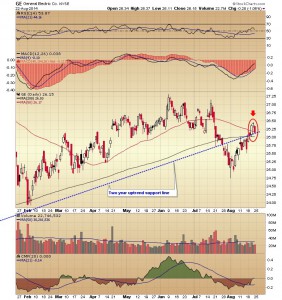