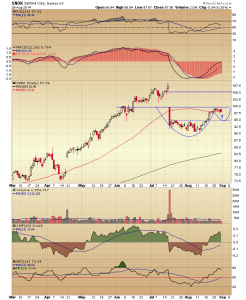 I want to take a look at two charts that reader and regular commenter, Mike, brought to my attention. The first is the chart of SanDisk (SNDK), and he suggests a cup and handle is forming below the July downside gap. In addition to that, there are a number of other interesting things happening on this chart.
Two weeks ago, the stock moved out of a small trough and broke above the $95.00 level. This move recaptured the 50 day moving average and saw an increase in Chaikin money flow, but the money flow index touched its overbought zone. Normally, an extended reading in the money flow index is a short term negative, but back in June the oscillator became extremely overbought and price continued higher, extending new highs by breaking above the same $95.00 level.
I don’t think the handle on this formation is completely matured and there could be some further downside (possibly to the $95.00 area) before the gap is filled, but price action will be the deciding factor. At this point, a close in upper candle range above the neckline would be a long entry point, but if the stock first moves back to the $95.00 level, a confirmed reversal candle in this area would be an alternative entry point. In either case use a trailing percentage stop. 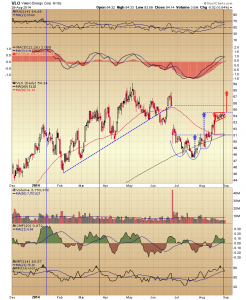 The second chart offers several interesting technical takes. Valero Energy (VLO) was hit hard in June after the Commerce Department eased some oil exporting restrictions and, since then, it has been attempting to base and return to trend. The basing process around the 200 day moving average, looks like an inverse head and shoulders pattern with neckline resistance at the $51.00 level. The pattern projects a target price at current levels but short of filling the gap, and at the same time, the two week pop that followed the neckline breakout and the two weeks of narrow range of consolidation after that, formed a small bullish pennant. The potential pennant pattern projects back to the May highs.
I think VLO is going higher but it may need to pullback first. The money flow index, a volume-weighted measure of money flow, is crossing below the 21 period average of the indictor, which I use as a signal line. Several times in the past when it has done this, even with strong Chaikin money flow readings, the stock price has pulled back, but of course, there is no guarantee it will happen again.
This is a tricky chart and, on a strict risk-reward basis, I’d be more inclined to buy a pullback near the rising 200 day moving average then I would a breakout of the pennant pattern which could find resistance after filling the gap.

Thanks Mike, and let’s see how these two play out.