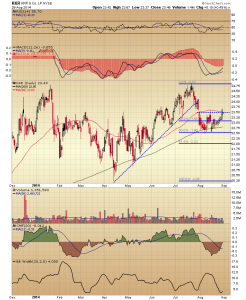 Mike asked about the KKR and Company (KKR) chart:
Shares of the private equity alternative asset managers moved in a measured series of higher highs and higher lows after testing their 200 day moving average in May, creating a well-defined uptrend line. That support was broken in July and the stock retraced 50% of the gain, again finding support on the 200 day average, but, also, finding resistance at the 50 day average. The consolidation this month between the borders of these averages has compressed the Bollinger band range, as reflected on the Bollinger bandwidth indicator at the bottom of the chart. This level of contraction has in the past, preceded price volatility. The relative strength index is above its centerline and the MacD has made a bullish crossover. Chaikin money flow crossed above the 21 period average of the indicator, which I use as a signal line, and is nearing its centerline. KKR has an 11% dividend yield.
The price action on the chart looks healthy and a long entry point is clearly defined by a close in upper candle range above the 50 day moving average, with a position size that accommodates a percentage stop under the 200 day average. 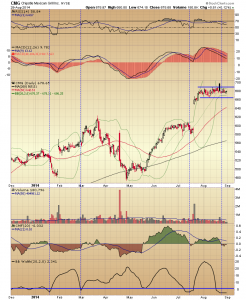 Jack was interested in Chipotle Mexican Grill (CMG):
The stock gapped up about 11% after reporting earnings last month. It immediately began trading in a tight range similar to the one it was in before the gap higher. This is, again, reflected in the low reading on the Bollinger bandwidth indicator at the bottom of the chart. While the stock has moved sideways this month, the MacD and the RSI have moved in bearish divergence, and Chaikin money flow has moved just below its centerline. Often, however, as a stock price consolidates the indicators revert back to neutral readings.
The CMG trade will be determined by a break above or below the channel consolidation range, but would require clear confirmation, in the form of several days of positive or negative outside movement. I find this stock a tough one to trade and while most agree it has the best casual fast food menu, I think there are better trading candidates in the space.

Thanks, to Mike and Jack for sending along their chart requests.