Shares of Starbucks (SBUX) have been trading above $76.25 support for the last two months, and are once again testing that level. The relative strength index and Chaikin money flow have dropped below their centerlines, reflecting a decline in price and money flow momentum. Bollinger bandwidth has contracted to squeeze levels and any subsequent move could be volatile. There is a gap to be filled that, coincidentally, is a 38% Fibonacci retracement from the April low to the July high. 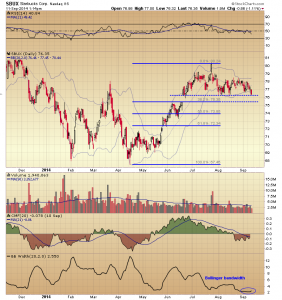