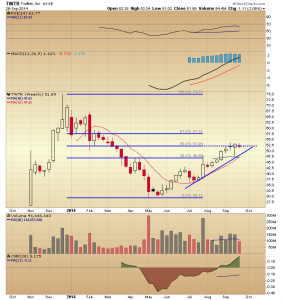 Linda requested I take a look at the Twitter chart.
On the weekly timeframe the stock can be seen breaking above its 10 week (50 day) moving average in June this year, and then moving back up to a 50% Fibonacci retracement of its range since coming public. The current 10 week average is making a “golden” cross above the 40 week (200 day) average, the price momentum indicators are trending higher, and Chaikin money flow is solidly positive.
The action on the daily chart is a little less positive. In this case, the RSI is above its centerline but trending flat, and the MacD is above its centerline but has made a bearish crossover. Chaikin money flow moved down into negative territory and the money flow index, a volume-weighted measure of relative strength, has crossed below the 21 period average of the indicator, which I use as a signal line. Note the reading on the Bollinger bandwidth indicator at the bottom of the chart, reflecting tight band contraction and the potential for a volatile move. It is hard to say in which direction the stock price will break, but support is clearly defined by the same uptrend line we saw on the weekly chart and resistance by the highs made this month. Trade around a confirmed break in either direction. 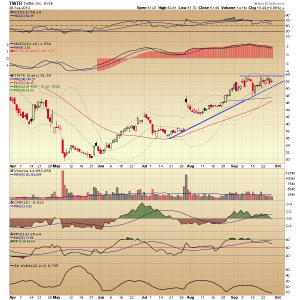