The NAZ gapped up after breaking its 200 day moving average, then after moving above its 50 day moving average, and today on making new highs. Today’s gap, while not fitting the definition of an exhaustion gap, is a little spooky because of the narrow real range and the close below the open. 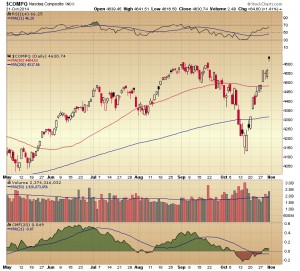 Call them “dojis” or “spinning tops,” the narrow opening and closing ranges on the daily candles of the major indices, reflect indecision. Traders are unsure about the effects of revisions in Federal Reserve policy going forward, and this perplexity is not a good thing as the markets attempt to make new highs. 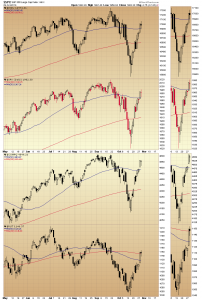 There was little reaction on the charts of IBM and Twitter to the data partnership announcement. There are still gaps to be filled and technical work to be done. 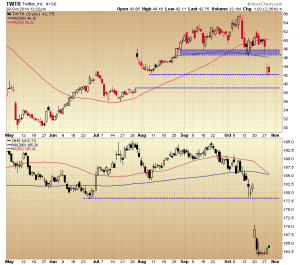 The opening gap lower in shares of Facebook (FB) has taken the stock price back down below its 50 day moving average and into lower Bollinger band range. 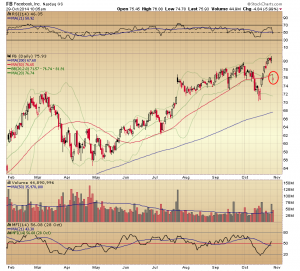 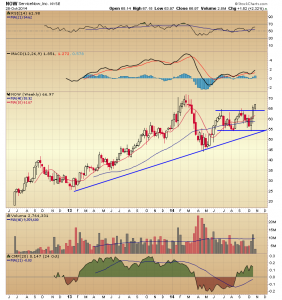 The weekly chart of ServiceMow (NOW) shows the stock trading in a horizontal channel since June of this year. The chart also shows the RSI and MacD trending higher during the consolidation period, and Chaikin Money Flow turning positive, reflecting accumulation.
On the daily timeframe, the channel can be seen in more detail, and this week upper resistance was taken out. The same price momentum and money flow indications are present on the daily time frame as seen on the weekly, and this technical coordination is a good sign for the stock price going forward. 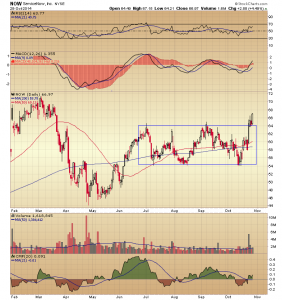 Shares of Tesla (TSLA) closed below their 200 day moving average for the first time since 2012, and remained below a trend line drawn off key 2013 and 2014 lows. 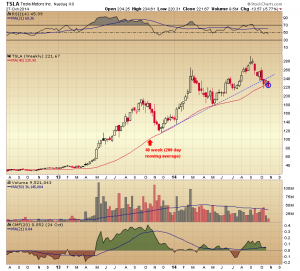 Rubicon Technologies (RBCN) makes scratch-resistant sapphire screen displays for smartphones and smart watches. There have been fundamental issues regarding the product and competition in the space, and the net effect on the company’s profitability is evident on the weekly chart. This chart also provides context to a more defined technical analysis.

This month a positive volume spike more than 400% greater than the 50 day moving average of volume, can be seen on the first daily chart. In the past after one day spikes of this magnitude there have been periods of follow-through buying, and the same can be said for follow-through selling after extreme down volume days. One notable exception is last August after a disappointing earnings report, the stock gapped sharply lower on volume that was over 400 times than the 50 day average. After the drop, however, it did manage a significant bounce into the end of the month before returning to trend and continuing lower. This is another layer of context to incorporate into a trading decision.

The second weekly chart shows more clearly a small “diamond” pattern which formed over the last month. Diamond formations are made up of two parts, an expanding triangle pattern followed by a symmetrical triangle pattern, and are usually seen at major tops. Also of note on this daily chart are the Bollinger Bands, a measure of standard deviation around price, which are located inside the Keltner Channels, a measure of standard deviation around Average True Range. This condition is one way of defining when a stock is being “squeezed,” a precursor to price volatility.

The company reports earnings after the close on Monday (10/27) and the diamond pattern, the “squeeze” condition, and a 23% short interest in the stock are suggesting there will be volatility associated with the release.

The October bounce: Don’t look now but volume is leaving the building. 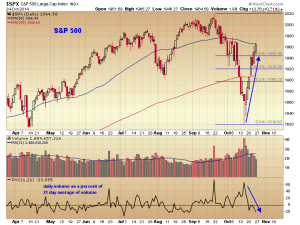 Shares of Amazon (AMZN) are trading down below the 50% retracement level of their 2014 range in the after-hours session, the $284.00 level that marked the March low this year. The integrity of this level could determine the intermediate term direction of the stock price. A breakdown brings the triangle pattern price projection into play, while basing or a bounce, further validates the level as key support. 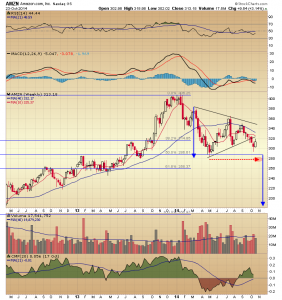 The major market indices continue to move within the parameters of the Fibonacci retracement levels measured off the September high and the October low. 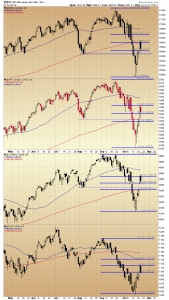