I mentioned the eveningstar pattern on the daily chart of the DJIA last week, and the index has moved lower since completing that formation. It dropped below the August/early September highs which had been resistance then became support, and moved back down to an intersection of support supplied by the 50 day moving average and the 38% retracement level of the August low (the last time the index touched the 200 day moving average) and the September high, where it is attempting to base and potentially move higher.
The ranges and the opening and closing levels over the last week have been interesting and illustrate what Doug Kass has been saying about “the market having no memory from day to day.”
On September 23rd, the DOW broke below the August support level, opening on its high that day and closing on its low; the following day it reversed opening near its low and closing on its high; the downdraft on Thursday encompassed the session’s full range and was followed on Friday, by a large white full body candle. These candles suggest some level of conviction that, unfortunately, lasts only a day. The action over the last two day period is particularly interesting and I wrote yesterday, “The rally off the lows in the Monday session formed a hammer-like candle, or possibly a hanging man candle, and the reversal off the highs today formed a shooting star candle. This candle suggests rejection and is considered a bearish signal. The juxtaposition of these candles illustrates the literal day to day oscillations seen recently in the market.”
This market has no memory from day to day, for sure, and it is not walking randomly down Wall Street, it is stumbling down the street. 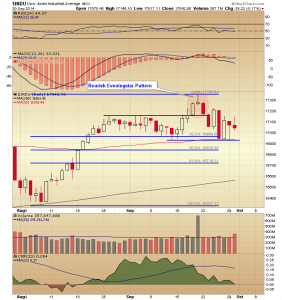