On Wednesday I noted, “Disney (DIS) is testing an uptrend line in place for over a year on its weekly chart. The candle is not mature and it is early in the trading week, but this stock has been a solid performer for a long time, seemingly immune to market fluctuations, and any penetration of this trend line demands attention.” Yesterday that trend line was penetrated in the first half of the session and recaptured in the second half of the session, forming a hammer reversal candle at an important support level.
MMM (MMM) is another stock that I consider a benchmark for the broader market and its chart resembles the Disney chart. Yesterday, however, the trend line was broken and not recovered, and the 200 day moving average was tested. The stock has not closed below this average since early 2012, and it will be a measure for the strength of the trend going forward. 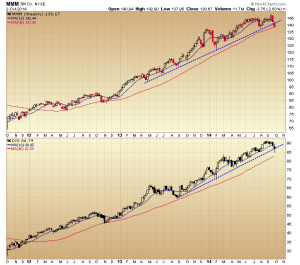