Shares of Bank of America (BAC) have been attempting to hold above the rim line of a cup and handle pattern formed earlier in the year on the weekly chart. The $16.00 area of support is being reinforced by the 10 week (50 day) and 40 week (200 day) moving averages. The intermediate term direction of the stock price could be determined by the integrity of this technical zone. 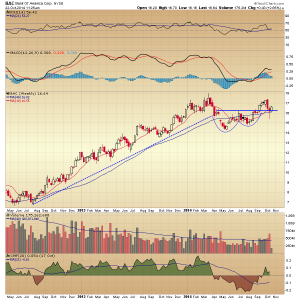 Shares of Starbucks (SBUX) have been making a series of lower highs and lower lows for the last three months. In yesterday’s session they moved up to retest the downtrend drawn off the move and then reversed, closing in their lower range and forming a “dark cloud cover” candle. This candle is considered a bearish reversal indication, but requires confirmation. The integrity of the downtrend line looks like a key level for the short-term direction of the stock. 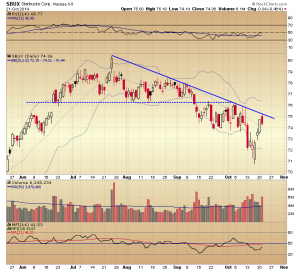 The bounce continues, as another level of Fibonacci resistance on the major market index charts was taken out in today’s session. 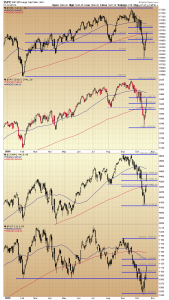 Today the stock price of Twitter (TWTR) touched the 50% retracement level of its historic range, and then pulled back to close near the low of the day. The significance of this Fibonacci series is reinforced by the general resistance it supplied in September, and the support the 38% retracement level, along with the 200 day moving average, supplied at the October low. Price momentum continues to trend lower and Chaikin money Flow reflects distribution over the last 20 day period. 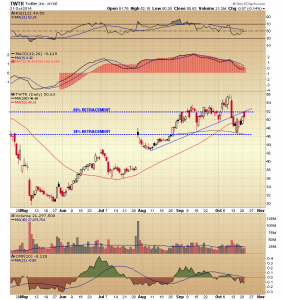 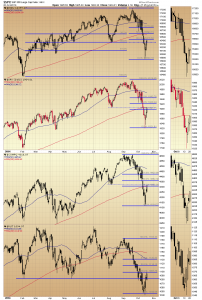 A very interesting series of candle closes occurred on the charts of the major U.S. indices on Friday. The DJIA closed above its open and in upper candle range, the S&P 500 index closed above its open in mid-to-upper candle range, the NASDAQ Composite closed below its open in mid-to-lower candle range, and the Russell 2000 index closed below its open, near the bottom of its candle range. In addition, while the DJIA closed back above its August low, also a 50% retracement of its 2014 range, the S&P and the NASDAQ met resistance at the 38% retracement level of September/October range, and the Russell failed at the same resistance level and closed back below its previous February/May 2014 channel low.
The relative technical deterioration in the stocks that initially led the broader market lower is not a positive sign going into next week. 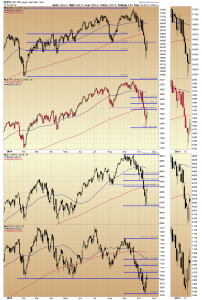 The Russell 2000 iShares (IWM) fund has been trading in a large horizontal channel for most of this year. It broke through channel support last week, but the bounce over the last two days has taken it back above the support line and returned it into the channel. The Relative Strength Index and the Money Flow Index have crossed above the 21 period averages of those indicators that I use as signal lines, a combination of positive price and money flow momentum.
It is too early to tell if the bounce will become a real rally or peter out, but it is likely the intermediate term trend of the fund will be determined by the price action around this channel support level. 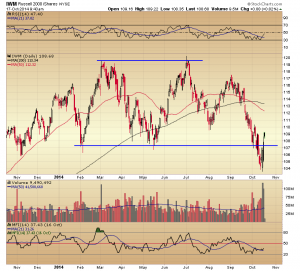 On Tuesday, I noted the overbought relative strength crossover of its 21 period average on the Apple (AAPL) weekly chart, and the wedge pattern on the daily chart. The stock price broke down through triangle support yesterday and, at this point in the session, is trading below its 2012 closing high. it is still very early in a volatile trading day, but this level could be key for the stock price going forward. 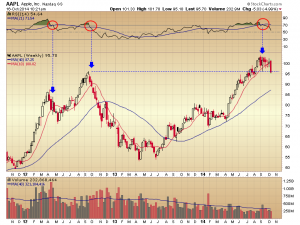 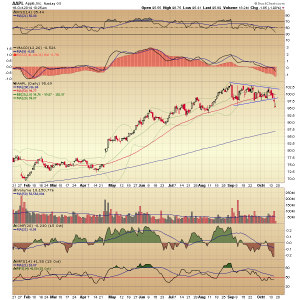 The intraday reversal formed large hammer candles on the DJIA and the S&P 500 charts. A hammer is considered a bullish reversal candle, hence the term “hammering” out a bottom, but like all candle or price patterns, they require confirmation. If we get some follow-through in coming days, the August lows will be the first level of resistance. The question is: Will traders buy or sell into a bounce? 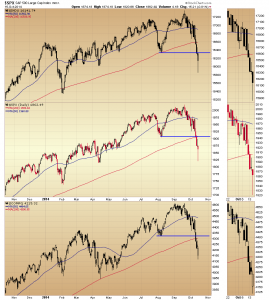 There have been a number of reversal candles on the charts in the social media space. Two notable movers are Twitter (TWTR) and Linkedin (LNKD), which both formed bullish engulfing candles after bouncing off their 200 day moving averages. 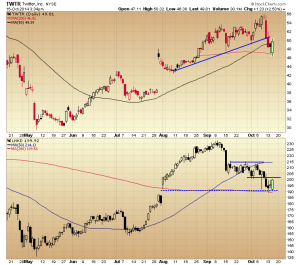