Shares of Amazon (AMZN) have been trading within a set of Fibonacci retracements measured off their 2014 range. The January to May decline found support at the 50% retracement level of the 2012 low and the 2014 high, setting the range for this year and a platform for a bounce to the July high. The move was halted at this year’s 62% retracement level, and the stock price dropped sharply over the next two weeks. It attempted another advance, this time meeting resistance at the 50% retracement level. The subsequent move down to the October low held at the May low, and the rally that has followed is now up against the 38% retracement level. This process of making lower highs above six month support has formed a descending triangle pattern. It remains to be seen if this last Fibonacci retracement level will hold and set up another move lower to test the support line or it will be broken and triangle resistance taken out, which would project a pattern price target to new highs.

Shares of Exxon Mobil (XOM) have formed multiple basing patterns on the daily chart over the last two months, but have been unable to sustain a breakout move. This month they have been trading in a range between the 50 and 200 day moving averages, forming the handle of a large cup and handle formation, with rim line resistance in the $97.00 area.

The Market Vectors Agribusiness (MOO) fund is breaking above 5 year rising triangle resistance. The top 10 Holdings of the Fund include:

There were lower highs on the Linkedin (LNKD) chart this month, along with a two month MacD divergence. A gap just below the low of the month contains the 50 day moving average, similar to the August/ September gap and the 200 day moving average. The $216.00 looks like important short-term support. 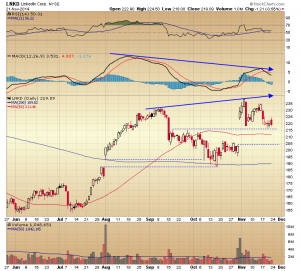 Shares of Walt Disney (DIS) have been strongly correlated to the S&P 500 since the 2009 low. There have been periods of dislocation, of course, and the stock and the index are currently in one of those periods. Disney shares have been making lower highs above their 50 day moving average this month, while the S&P 500 index continues to track higher. The price action has formed a triangle pattern above the flat moving average. The integrity of this support line will determine if Disney is acting as a leading indicator or will rebound and catch-up to the index.

The major indices posted gains on Friday, but the charts reveal price action that was less positive than the closing numbers might indicate. Intraday reversals formed large high wick or upper range candles on the DJIA and S&P 500 index charts, and the Russell 2000 and the NASDAQ Composite closed near their lows of the day. The reversals began immediately after strong opens, as seen on the ten minute S&P chart, and only a final hour rally prevented a close much nearer the session lows.

The weekly trend is higher on the all but the Russell chart, where the consolidation this year is moving sideways, and that is an intermediate term positive for the markets. There is, however, a general sense that a breakdown in the small-caps will drag the broader market lower. In September when the other indices were making higher highs, the Russell made a lower high, eventually taking out its 50 day moving average and leading the way down to the October lows. Currently, there is another warning sign on the weekly Russell chart, the rare Tri-Star pattern, a three period set of doji candles whose narrow opening and closing ranges represent indecision. This combination of candles is often seen at market inflection points. 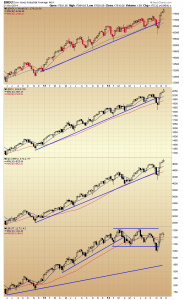 There have been a number of false “cautionary” candles on the charts since the October low, however, like the Tri-Star pattern that formed on the daily chart of the S&P 500 index two weeks ago, that was quickly negated by this week’s stronger close. That is why an objective technical viewpoint and price confirmation are important components of a successful trading plan.

Tesla (TSLA) recaptured a long-term uptrend line and filled the October gap last week, but stumbled today dropping 3.8% in the session. The stock price is re-testing its 50 day moving average, currently at the bottom end of the gap, and has moved back below the uptrend line, which is drawn off the December 2013 and May 2014 lows.

Shares of GoPro (GPRO) are testing the neckline of an inverse head and shoulders continuation pattern on the daily chart. The Relative Strength Index is tracking above its centerline, and the MacD is making a bullish crossover just above its centerline. The pattern projects a price target in the $105.20 area.

I’ve been following the movement of Regeneron Pharmaceuticals (REGN) shares within a series of price channels for some time, and this week they are breaking above the most recent level of resistance. If they were to hold this level and begin another measured move, the target projection is in the $452.00 area.

The US Dollar Index (USD) has moved back up to the highs of 2009 and 2010, and the trade around the question of whether it breaks to new highs or pulls back from this level, may be determined by the borders of the small channel on the daily chart of the PowerShares US Dollar Index Bullish Fund (UUP).

A large dark candle formed on the daily UUP chart at the end of last week which tested the $23.44 resistance level and support at the $23.22 level, the upper and lower boundaries of the consolidation. Moving Average Convergence/Divergence has been in bearish divergence to price since the October high and is making a bearish crossover, and the Money Flow Index has moved below the 21 period average of the indicator, that I use as a signal line. The 200 day moving average is rising to meet the October gap and that would be the first area of support, in the case of a breakdown.