Shares of TiVo (TIVO) have formed a large cup and handle pattern on the daily chart. The $13.25 rim line resistance level, coincides with a 62% retracement of the August high and the October low. The Relative Strength Index and the Money Flow Index are tracking higher and above their centerlines. A close above resistance in upper candle range looks like a good risk/reward trade, with an initial stop under the 200 day moving average and the handle bottom. 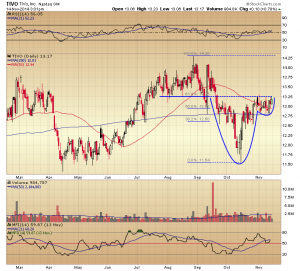 I wrote here yesterday: The Russell 2000 formed a tweezer or two-day reversal pattern, a large white candle followed by a large dark candle. The implication is a shift in sentiment. In addition to this candle pattern, I’m watching the developing overbought condition of the index and the IWM fund. Two of the indicators that I use to measure overbought or oversold conditions are the Relative Strength Index and the Money flow Index, a volume-weighted relative strength measure. I overlay a 21 period average of each indicator as a signal line, and crossovers near overbought levels can be bearish signals. There have been four previous instances of this bearish coordination of price momentum and money flow, which have led to intermediate term declines. The indicators are currently overbought, but they have not crossed under their averages; that, of course, could change quickly. 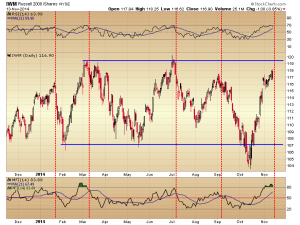 A large bearish engulfing candle formed on the Alibaba (BABA) chart today. The single candle range nearly encompassed all of this week’s candle range. The Relative Strength Index and the Money flow Index, a volume-weighted relative strength measure, crossed below the 21 period average of the indicator that I use as signal line, from overbought conditions. 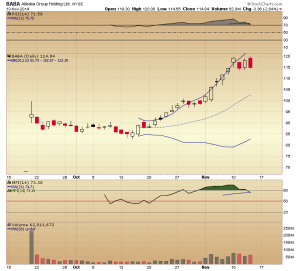 The S&P 500 Index and the NASDAQ Composite had very narrow opening and closing ranges today, forming doji candles on their daily charts. These candles suggest at the least, that traders are conflicted about short-term market direction and they reflect indecision. The Russell 2000 formed a tweezer or two-day reversal pattern, a large white candle followed by a large dark candle. The implication is a shift in sentiment. A high wave candle, reflecting rejection in upper candle range, can be seen on the DJIA chart.
There have been multiple doji and similar reversal candles on these charts during the rally off the October lows, none of which were confirmed, and while that may be the case once again, it is important to be aware of a potentially bearish signal in an overbought market. 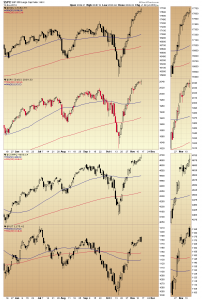 Tesla (TSLA) has closed the October gap, and is back above its 50 day moving average and long-term uptrend line. 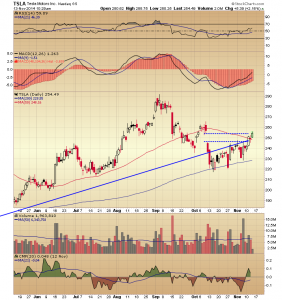 The major Europe iShares funds underperformed the S&P 500 index in yesterday’s session, with the Germany fund down 1.5%, the France fund down 1.4%, the Spain fund down 1.7%, and the Italy fund down 2.7%. The European markets look stronger this morning, but are still trading around trend lines that I have been highlighting on their daily charts. Failure to hold these levels suggests a test of the October lows, action which would put pressure on an overbought U.S. market. 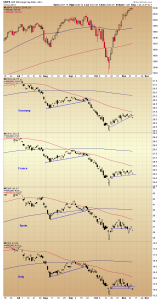 The recent decline in Twitter (TWTR) shares closed the July gap and today the stock price is rebounding, up over 4% at this point in the session. A deep oversold condition in price and positive money flow is reflected in the Relative Strength Index and the Money Flow Index, and now the upside price target is to fill the October gap. 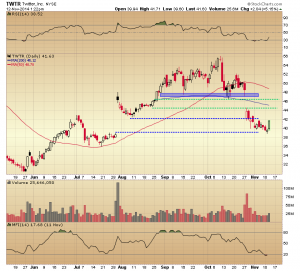 Tesla (TSLA) saw a 3.75% gain today, a move that took it back above a one year uptrend line and its 50 day moving average. The price momentum and money flow indicators are positive, and the stock is attempting to close the October gap. 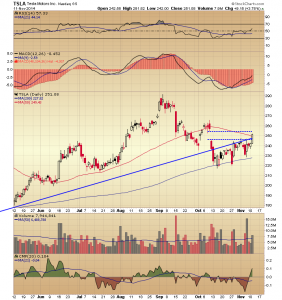 The SPY is testing multiple trend line support and the neckline of a possible head and shoulders formation.

Shares of Groupon (GRPN) broke above a six month resistance level and their 200 day moving average this month, and today are bouncing sharply after retesting that level. This move could be confirming a base has been established and the stock price is poised to move higher. 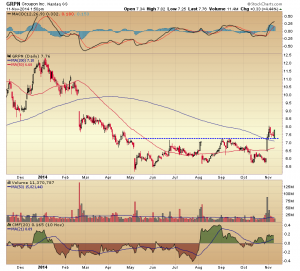