Shares of Google (GOOGL) been trading in a horizontal channel consolidation since the beginning of the year. In July they returned to the top end of that channel, moving in a smaller fractal version of it, before breaking that interior support and returning to test the larger channel support level. They bounced off their October low but met resistance at the former smaller channel support level-turned-resistance. The stock price has since retreated and has been trading under a downtrend line drawn off the September/November highs. A move back up to the top end of the larger channel would have to take out multiple layers of tough technical resistance, and, at this point in time, a retest of that channel support seems the more likely scenario. 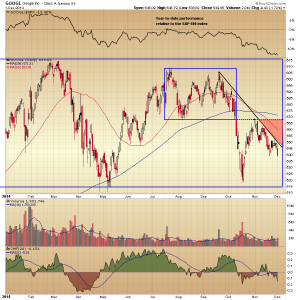 I have a short position in the stock.