Tesla (TSLA) shares had been making a series of higher highs and higher lows, trading in a rising channel on its weekly chart. Two months ago it began moving in a sideways channel, two weeks ago it broke the rising channel uptrend line, and last week it took out the October low. The MacD has been in bearish divergence for most of this year and this month the Chaikin Money Flow Index crossed below its centerline, reflecting distribution. The downside price target is the April low in the $180.00 area. 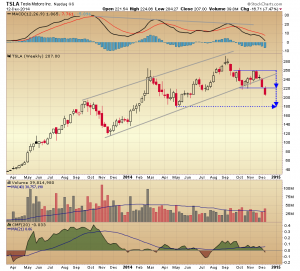