The iShares Emerging Markets (EEM) fund has been attempting to base for the last two months, making a higher low under a static resistance level and forming a cup and handle pattern on the daily chart. Today it broke above the intersection of rim line resistance, the 50 day moving average, and a downtrend line drawn off the previous September and November highs. The Relative Strength Index and MacD have crossed above their centerlines, and Chaikin Money Flow is reflecting minor accumulation. The price action is framing out a good risk/reward trade at its current level. 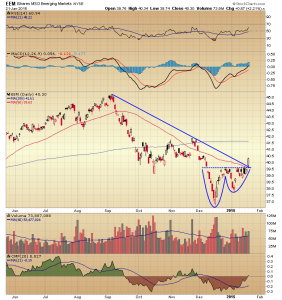