Market Vectors Semiconductor (SMH) shares are up 8% this month after bouncing off the bottom end of a three month consolidation channel. Last week they broke above the upper range of the channel, retested that resistance-turned-support and, at this point in today’s session, are making another strong move. A close at or near current levels is a good risk/reward entry point with an initial percentage stop under the channel top, and with an initial target price projected to the $60.00 area. 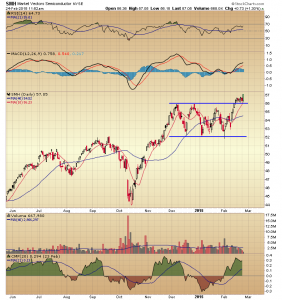 Strong rallies in the Europe iShares funds, which have broken above resistance levels and key moving averages. 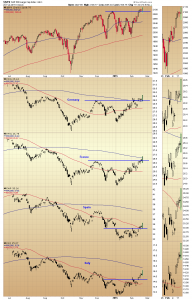 Dollar General (DG) broke above its 50 day moving average this week, and out of a two month triangle pattern consolidation. The pattern target projects to new all-time highs for the stock.

There is a lot of time left in a potentially volatile trading day, but the December highs look like a key level for the S&P 500 index to hold above into the close. Stochastics and the Money Flow Index, a volume-weighted relative strength measure, are in or near overbought conditions, and while a pullback to support in the 2066 area would be mild, it might suggest the recent break to new highs was a false move. 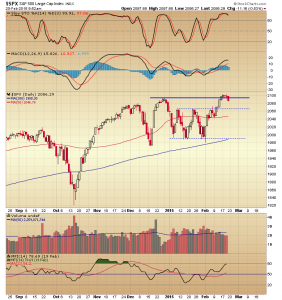 Shares of International Business Machines (IBM) have underperformed the broader NASDAQ Composite index by more than 20% over the last year. They did find some support, however, in the $150.00 area in December and January, which is a 38% Fibonacci retracement of their 2008 low and 2013 high. The stock price is back above its 50 day moving average, and the RSI and MacD reflect the recent positive price momentum. Chaikin Money Flow crossed above its centerline this month, indicating buying interest at these levels. There is a large gap to be filled just above resistance and a lot of relative performance to recover; it could be “Big Blue” is poised to make a move. 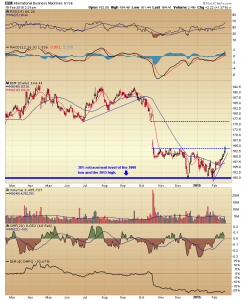 Europe is the drag on our market today.

The daily Exxon Mobil (XOM) chart is thing of beauty. In one pictograph it reveals the probabilistic character of charting and why it is an art form and not a science. The downtrend trend line that formed after the decline off the August highs to the October lows was broken to the upside and retested, forming a large inverse head and shoulders pattern with neckline resistance at the 50 % Fibonacci retracement level of the August/October range. The breakout that followed targeted a strong move but it was quickly thwarted by resistance at the 62% retracement level. The positive takeaway was the potential cup and handle formation it morphed into, with rim line resistance at the 62% level and an even higher target price projection. There was no breakout and the stock price reversed falling back to the October low, which was also the low of the year. Another positive was the potential for a double bottom and there was a bounce rally that retested and failed at the 50 retracement level. This year’s January low started to look like the right shoulder of another inverse head and shoulders pattern, but the 38% retracement level thwarted that advance to the apparent neckline. Since then, the stock has remained under this retracement resistance and dipped down to make a third intermediate term low. Today it is testing the downtrend line drawn off the highs since December and the 38% Fibonacci level. If it breaks to the upside, is a triple bottom in place? Can we expect a strong move to sheer throught the retracement levels? New highs? No, we can’t expect anything, all we can do is react prudently. Use tight stops on countertrend trades, respect tested trend lines, and understand patterns can fail to live up to your expectations, let them prove themselves.
The charts give and they take away, and the true key to successful trading is proper money management. Spend just a small portion of the time you scan charts, working on your money management plan and trading becomes more deterministic and less probabilistic.

Twitter (TWTR) shares have broken out of their long term base zone and moved up to close the October gap. Note the strong positive volume bar in Thursday’s session. The volume bars record volume on a day where the close is higher than the previous day as a positive bar, and on a day when the close is lower, as a negative bar. Chaikin Money Flow measures money flow differently by using a range multiplier over a fixed period. In this case, the period is one day and the indicator suggests that Thursday’s strong volume should be recorded as down volume. So, today it looks like the money that exited the trade before earnings is now running to get back in. It will be interesting to watch the behavior of the stock when they get their fill.

Cavium Networks (CAVM) is not experiencing the bounce seen in the broader semiconductor space this month. A head and shoulders top has formed on the daily chart with neckline resistance in the $57.00 to $56.00 area. The MacD and RSI have been tracking lower since the December left shoulder formed, and the volume-weighted Money Flow Index has moved out of an overbought condition and is sitting on its centerline. A neckline break projects back below the 200 day moving average. 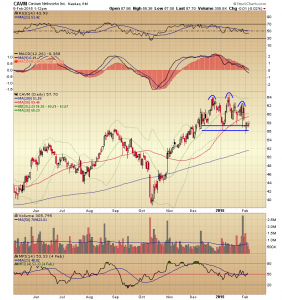 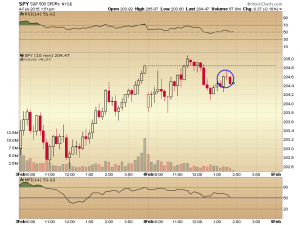