The collapse in stock prices in the last two hours of Friday’s session created another round of sinister dark candles on the daily index charts and negated Thursday’s strong white candles. Bearish engulfing candles, dark candles that encompass the range of the previous candle, formed on the DJIA and S&P 500 charts. It seems inevitable now that the zone of support delineated by the December and January lows will be tested, but of course, the obvious is always more so in retrospect. The 50 day moving averages were breached again this week and, in the case of the DJIA, the S&P 500, and the Russell 2000, the 200 day moving averages are helping to reinforce the support zones. 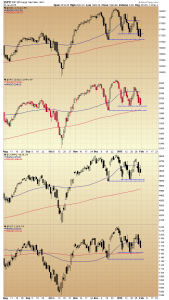 Bearish engulfing candles also formed on the weekly charts, but the indices are still trending well above the major uptrend lines. If these trend lines were to be tested it would be about a 10% corrective move in the Russell and less in the other indices, and they would not likely give way without a fight. 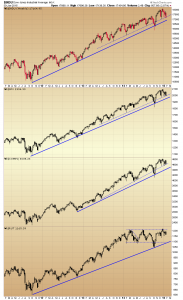 The monthly uptrend lines are clearly intact but there are also bearish candle formations on these charts. Evening stars are three period candle patterns consisting of a large white candle, followed by a narrow opening and closing range “doji” candle, and completed by a large dark candle. They represent transition from bullishness to bearishness, and are often seen at important tops. There are evening stars on the charts on the DJIA, the S&P 500, and the NASDAQ Composite, while another in a series of bearish engulfing candles formed on the Russell 2000 chart. 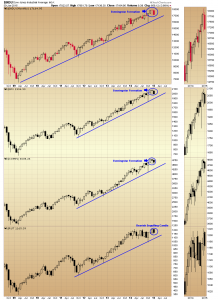