The cluster of high wick candles that formed in February and early this month may have been a tell, but Lindedin (LNKD) shares were unable to sustain new highs after breaking above their 2013 high. In fact, they drifted back below that level and today broke the 50 day moving average and closed on the low of the day. Clearly, there is a support vacuum in the February gap. 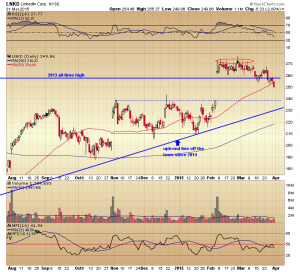 Shares of the Walt Disney Company (DIS) have been moving higher over the last two months in a broadening formation, even as the MacD indicator has been in bearish divergence and with Chaikin Money Flow reflecting distribution. As long as the stock price holds above the rising support line and the 50 day moving average, it remains on trend and the indicators will readjust over time. A break below this layered support, however, and a move back down to fill the February gap becomes a distinct possibility. 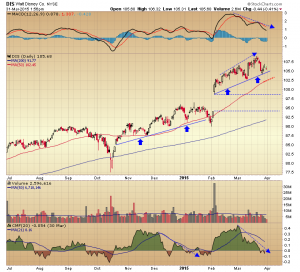 Price action over the last two months in Weyerhaeuser(WY) shares has been bounded by channel lines and key moving averages. This week the stock held the large March channel support line and today it is retesting the 200 day average, up on a broadly down day. 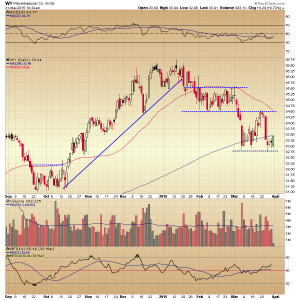 Exxon Mobil (XOM) shares are back up near the $85.75 level. This area was solid support for about five months before it was broken last month. A sustained move back above it could signal the beginning of a bottoming process.

Commercial Metals (CMC) shares broke above a six month downtrend line last week, and today are taking out rim line resistance of a large cup and handle formation and their 200 day moving average. The price and money flow momentum indicators are all in positive territory and tracking higher, and the pattern projects a target in the $19.00 area.

A reader requested I take a look at the Google (GOOGL) charts:

Google rallied off its 2012 low making a series of higher highs and higher lows for the next two years. The pullback to the 200 day moving average in April 2014 looked like a normal reversion, but the inability of the stock to move off the average or make a new high saw momentum wane, and it faded back below the 200 day, eventually breaking the uptrend line that marked the rally. Shares have since moved in a shallow angle channel, bouncing off the channel bottom and the 38% retracement level of the two year rally earlier this year, and returning near channel resistance last month. 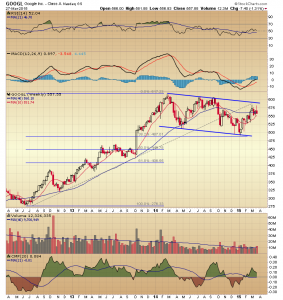 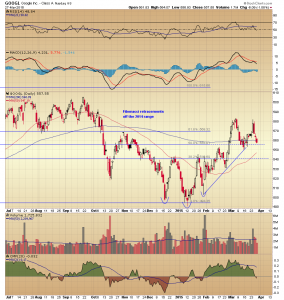 The daily chart shows the early 2015 test of channel support as an inverse head and shoulders bottom, with neckline resistance the 38% retracement level of the 2014 range. The stock price moved back up near the channel top and has since consolidated above an area delineated by the 200 day average and the 50% retracement level. On Monday a large bullish white candle formed on the chart and it was followed by a large dark bearish engulfing candle. This is called a two-day reversal or a tweezer and is considered a bearish reversal pattern, and price moved back below the 200 day average to just above the 50% retracement line.Chaikin Money Flow has crossed below its centerline, reflecting distribution over the last 20 periods, and the price momentum indicators are tracking lower.

It looks like the stock wants to continue the pattern that defines the channel, which would require a lower low and a new low for the year. That would be the logical inference, and as we all know stocks always act logically.

I have been highlighting the movement of Tesla (TSLA) shares within clearly defined channel consolidations on the weekly chart. This week they tested the support line of the lower channel. To reverse this measured decline requires several strong closes above the resistance zone delineated by the eight month downtrend line and the top end of this last channel. On the other hand, a breakdown projects to the 2014 low, in the $140.00 area. 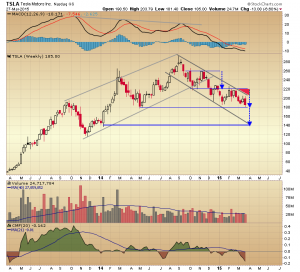 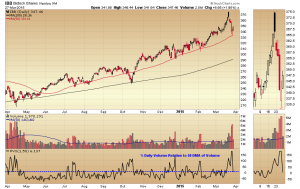 Renaissance RE Holdings (RNR) shares are breaking below a key channel support area marked by the intersection of the 50 and 200 day moving averages, and a support line drawn off the March lows. Chaikin Money Flow and MacD are crossing below their centerlines, reflecting negative price and money flow momentum. The channel breakdown projects to an initial price target in the $97.00 area. 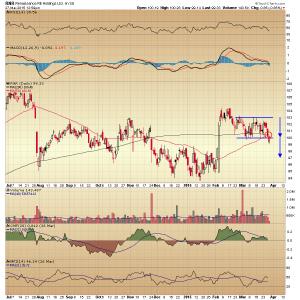 I am short shares on RNR.

The S&P 500 Index saw a nice recovery intraday and came away with only a modest loss, but it still remains below its 50 day moving average and the trend line denoted by the January highs. Yesterday’s price action formed a high wave or spinning top candle, one with a narrow opening and closing range and a long upper and lower shadow. It reflects indecision. 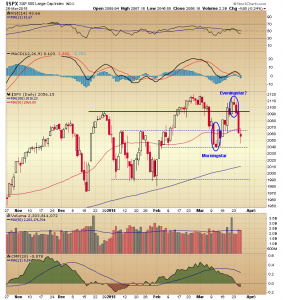 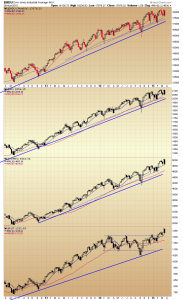 The real issue is the weekly candle. At this point in its formation, it looks like a large bearish engulfing candle, and while the indices continue to trend higher on this timeframe, it does have dangerous intermediate term implications. Today’s action needs to change the character of this candle.