I have been highlighting the continuing formation of “shooting star” candles in high wick clusters on the Lindedin (LNKD) and the Twitter (TWTR) daily charts for several weeks. These series of candles reflect an inability to hold new highs and are bearish signals. Another combination of bearish candles has formed over the last three days on the Facebook (FB) chart. 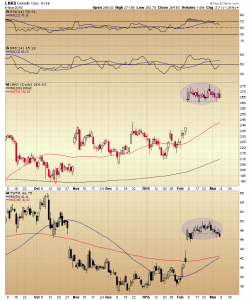 The weekly chart of Facebook shows the stock trading in a wide horizontal channel for the last six months. The lower end of this consolidation is in the $73.00 area and the upper end is marked by three distinct highs. Price momentum has been declining during this phase, along with a significant drop in volume. The bearish candle formation can be seen on the daily chart. 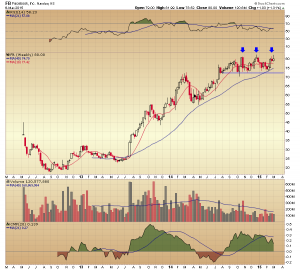 An eveningstar pattern is a three-period reversal formation that consists of a large white candle, followed by a narrow opening and closing range “doji” candle, and completed by a large dark candle. It reflects a transition from bullishness to bearishness, and appearing at channel resistance, and a potential triple top, adds more significance to the formation. 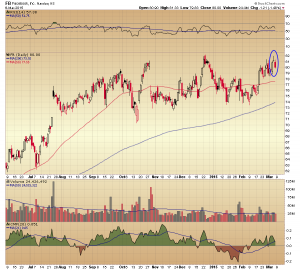 This coordinated action in these three big names suggests an overall weakness in the sector.