On March 12, I highlighted the morningstar patterns on the daily charts of the major indices. These bullish reversal patterns played out over the last two weeks reversing the decline that began at the beginning of the month, and taking stocks higher. But yesterday an eveningstar pattern made an appearance on those indices. This sister pattern consists of bearish transitional price action, with a large white candle, followed by a narrow opening and closing range doji candle, and completed by a large dark candle. Like all candle patterns it requires confirmation, but certainly has the potential to define a short-term reversal point. The momentum indicators have flattened, and the Chaikin Money Flow indicator has moved just below its centerline, reflecting negative money flow. 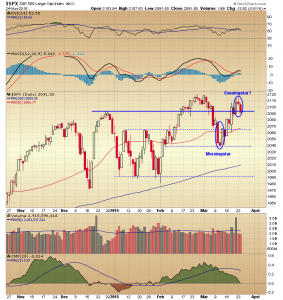