The Russell 2000 Small Cap Index (RUT) traded in a horizontal channel in 2014 and then broke above channel resistance this year. This week the index pulled back from its recent highs and broke below an uptrend line drawn off the March/April lows.

Yesterday, it closed below its 50 day moving average. It looks like it is headed towards a wide zone of support delineated by long and intermediate term trend lines, with the next level of support being the 200 day average. Of interest, is the potential triple top formation defined by the March and April highs.

PRA Group (PRAA) manages a portfolio of defaulted accounts receivable, and the company reports earnings after the close today. The stock spent the first three months of the year basing below a downtrend line drawn off the period highs. In April, it broke above the trend line and immediately began trading in a narrow horizontal consolidation. The readings on the Average True Range and Bollinger Bandwidth indicators reflect the tightness of the contraction and suggest the potential for a volatile move. Price momentum indicators are flat as would be expected with this level of range contraction, but Chaikin Money Flow has been reflecting modest accumulation. There is a 25% short interest in the stock, and if it were to break to the upside after a positive earnings report, there could be a strong covering rally. 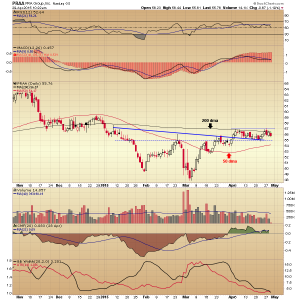 The PowerShares QQQ Trust (QQQ) moved sharply lower in the first hour of trading, and then a morningstar pattern formed on the 10 minute chart and reversed the trend. A morningstar pattern is a three period bullish reversal formation, that consists of large dark candle, followed by a narrow opening and closing range doji candle, and completed by a large white candle. It represents transition from bearishness to bullishness. The doji candle in this case could be classified as a hammer candle, and the long lower tail indicates sellers were in control initially, but buyers stepped up and took prices back into the upper half of the range.

A bullish hammer may have formed today on the daily chart, after price tested resistance-turned-support in the area of the March highs, however this candle may also be interpreted as a bearish hanging man candle. A hanging man candle is identical to the hammer candle in construction, what determines the difference in interpretation is that the hammer forms in a downtrend, often near support, and the hanging man forms in an uptrend, often near resistance. 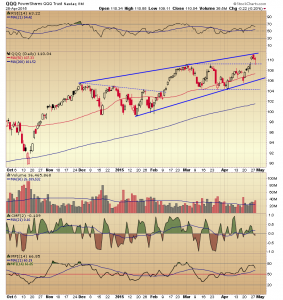 So, over the intermediate term, the QQQ has been trading in a rising channel and is testing channel resistance, a hanging man scenario, and over the shorter term it has bounced off the March high support line, and has the potential to be a hammer candle. Confirmation is always key. A close below the March highs reinforces the hanging man scenario and a break above this week’s high or the upper channel line suggests the hammer scenario.

Apple (AAPL) shares initially rallied today to new intraday highs following yesterday’s earnings report. They have since pulled back over 3.5% from their highs to retest the former zone of resistance-now-support in the $128.50 to $129.500 area. 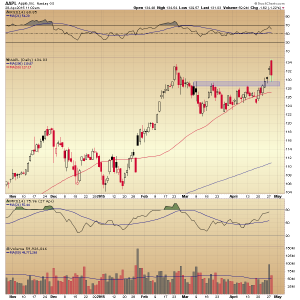 The S&P 500 index closed down today, a small percentage move, but back to the lower end of the zone that has acted as resistance for the last two months, and the DJIA failed at its similar level of multi-month resistance, while the NASDAQ pulled back to just above its breakout level, and the Russell 2000 index, lower by over 1%, is back near its 200 day moving average. 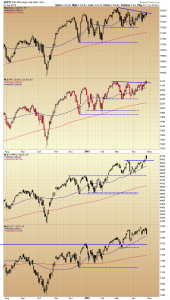 The doji star on the SPY chart that I highlighted over the weekend may have, in fact, been a bearish omen. There is still plenty of time in the trading session to recover some positive momentum, but the close will be key.

As of Friday’s close, 60% of the stocks in the S&P 500 were above their 50 day moving averages. Considering the index is testing all times that reading is low and leaves more room to run.

A reader asked if I would take a look at the Chipotle chart:

A large engulfing candle formed on the weekly chart, encompassing the trading range of the previous two months. The 10 week (50 day) and 40 week (200 day) moving averages, along with a long term uptrend line have been penetrated, and the stock closed very near the low for the week. Volume as a percentage of the 50 day moving average of volume was at a level not seen since July of 2012. 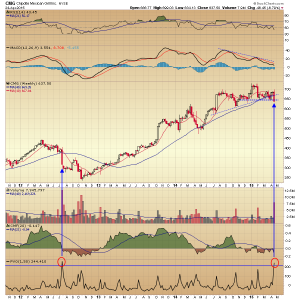 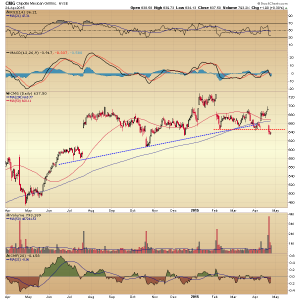 On the daily chart, the broken trend line looks like the neckline of an extended head and shoulders formation. That pattern projects a downside target in the $560.00 area. It remains to be seen if that bearish scenario will play out, but it will take a lot of technical repair before you can get bullish on this stock.

Technical analysis is, in large measure, about finding repetitive price patterns and sometimes the inverse of those patterns. The daily Google (GOOGL) chart shows the stock making a triple bottom in December and January, which marked the low from which the stock rallied to its March high. That high was the first of three with the last made on Friday, all in the $585.00 area. This mirror image of the previous basing price action has the potential to become a triple top. If Google were to pullback, support is defined by the zone between $561.00 and $550.00, an area reinforced by the 50 and 200 day moving averages. 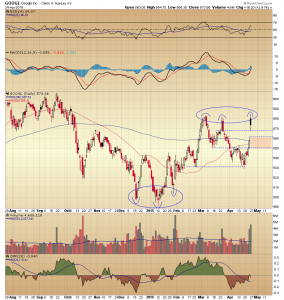 The 3M Company (MMM) lowered its outlook for earnings and the stock disconnected from its long-time close correlation to the S&P 500 index. It remains to be seen if this is an omen for the broader market.