There has been some interesting short term spot gold price action. First, a look at the weekly chart puts things in perspective. The horizontal support line of a multi-year triangle pattern was broken in April 2013, and the price quickly dropped to the projected pattern target level. It was unable to sustain a longer term rally off this low and faded in a descending channel pattern, through 2014 and into this year. There are signs, however, of potential short term hope for the yellow metal, which can be seen on the daily chart. 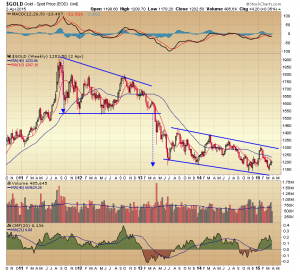 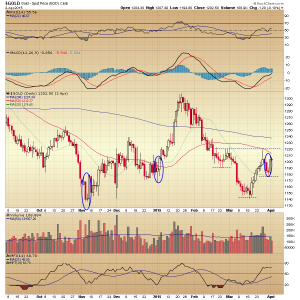 The last channel bottom test came in November 2014 and shares bounced after forming a morningstar pattern. This three-day bullish reversal pattern is defined by a large dark candle, followed by a narrow opening and closing range doji candle, and completed by a large white candle. It represents a transition from bearishness to bullishness. The move faltered in late December, but another morningstar formed and the rally continued into January of this year. Once again, the price of gold fell, returning to the area of the November lows last month. Last week another morningstar pattern formed and, in addition, looks like the right shoulder of an inverse head and shoulders pattern. If former post morningstar price action where to repeat, spot gold prices should move higher over the short term.