Over the last year big data company, Tableau Software (DATA) has made a series of higher highs and higher lows on its weekly chart, and is currently retesting its all-time highs in the $100.00 area. The Bollinger Band histogram shows the entire advance within the upper band. (The light grey area is the upper band, the middle tone is the 20 period moving average centerline, and the dark bars are the lower band range.) Since the beginning of the year, however, the stock price has been trading in a consolidation channel between $90.00 and just above $100.00 level. 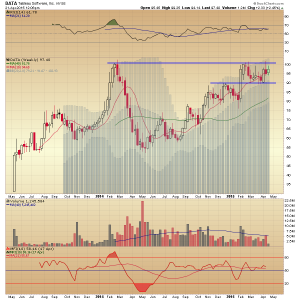 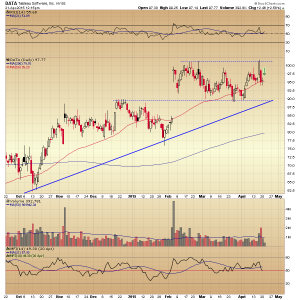 The consolidation can be seen more clearly on the daily chart, with the price and money flow momentum indicators flat as would be expected at this location in the zone. The stock has pulled back off its highs in this early stage of the session, and a weak close could be a precursor to a retest of the 50 day moving average or the channel bottom. In either case, the long term trend remains higher and the intersecting support lines, if tested, should offer solid support. There is something about the psychological magnetism of the $100.00 level, and I expect this stock will eventually retest it and breakout to new highs.