The S&P 500 index is, as everyone knows, in a trading range and that range is contracting. What looked like a horizontal channel consolidation a few weeks ago is converting into a symmetrical triangle pattern, currently below a zone of resistance between 2120 and 2110, and above a rising trend line drawn off the March/April lows. The symmetrical triangle has two converging trend lines, unlike the rising triangle which has a flat upper trend line and a rising lower trend line. A coil or symmetrical triangle is considered a continuation pattern.
The index recaptured its 50 day moving average in Monday’s strong session and yesterday it closed just above the previously important 2014 high level. The text books suggest at some point we should expect a breakout to new highs and a resumption of the long term uptrend. If the index were to breakout at this point, the pattern projects a target in the 2180 area, but the books also say that mature patterns that break later in their formation and at or near their apex are less reliable and less potent. We’ll see how it plays out. 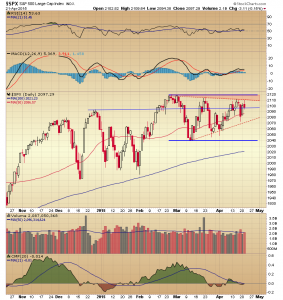