Another narrow opening and closing range doji star candle formed on the chart of McKesson (MCK) after testing the top end of a two month trading channel. The channel top was formed by doji candles in February and March, followed in both cases by hammer candles that forged the channel bottom. Today’s price action recorded a positive volume bar because the close was higher than yesterday’s close. Accumulation/distribution actually declined because that more accurate measure of money flow uses the closing price within range as reflection of positive or negative money flow. The close well into lower candle range caused the indicator to reflect a negative day. If history is a guide, the stock should pullback from its current level and possibly retests the channel bottom. 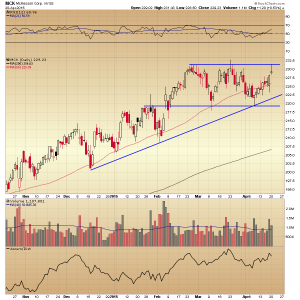 The daily chart of the Exxon Mobil (XOM) shows how the $86.75 to $87.25 area acted as support containing the October, December, and January lows, but when it failed in March, the role was reversed and it became resistance for the next month. The stock price broke above this resistance last week, and the decline in the Friday session saw it retest, then close below its open, but in upper candle range forming a bullish hammer candle. Early in today’s session the stock moved up sharply, but nearing the close of trading has reversed and is back near lower candle range, forming a high wick reverse hammer candle. This suggests the potential for another test of the key support level. Ultimately, for the long term health of the stock it will have to move above the downtrend line drawn off the highs since last August. 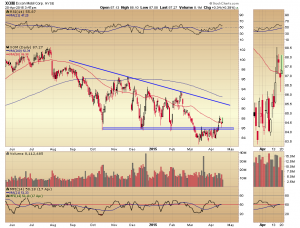 Shares of home building products company, Masco (MAS) have moved below an intermediate term uptrend line and are testing the lower end of a multi-month trading channel. The MacD has been in bearish divergence during most of the recent consolidation and the RSI has crossed below its centerline. A breakdown projects an initial target at the current location of the 200 day moving average. The S&P 500 index is back to its 2014 high level, an area which has acted as support and resistance. More technically important than this resistance, however, is the support of the 50 day moving average. 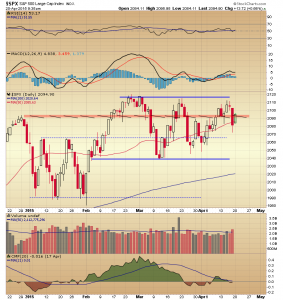 Mike is a regular reader and he asked if I’d take a look at the El Pollo Loco chart. Here goes: 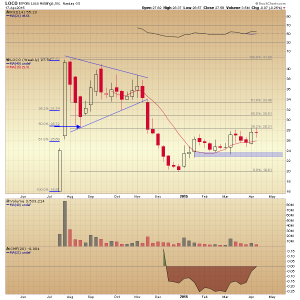 El Polo Loco Holding (LOCO) has been trading for less than a year and on the weekly timeframe many of the moving averages and technical indicators have not had time to become useful tools. It is always raw price action and not the data that is filtered out that determines the trade, and that is what we’re looking at with this chart. The stock spent the two weeks after its IPO moving straight up before valuation concerns caused early investors to start taking profits in the $40.00 area. It pulled back and then bounced in the $28.00 area, about a 50% retracement of its initial range, and then began trading in narrower ranges around its 10 week (50 day) moving average. This price action created a large wedge or symmetrical triangle pattern that was broken hard in November after a good earnings report but concerns over higher chicken prices. The price of chicken is something that technical analysts don’t have to worry about, but, of course, the pattern breakdown was important, and the stock dropped sharply and significantly before it found support in the $20.00 area. Shares of El Pollo Loco have spent this year establishing a foothold above their 50 day moving average and beginning a slow and steady climb back up towards the 38% retracement level of August high and December low. This $28.25 level has been resistance for the last month during which time Chaikin Money Flow has moved towards positive territory and the RSI has moved above its centerline. 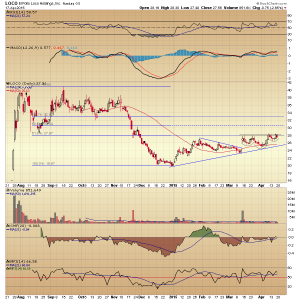 On the daily timeframe, the recent consolidation under Fibonacci resistance can be seen as a small inverse head and shoulders formation, with the head holding above an uptrend line drawn off the lows of this year and the neckline the first level of retracement. The price and money flow momentum indicators are all tracking above their centerlines and higher, and the stock looks like it is preparing to take out resistance. The trade is to wait for a confirmed breakout in upper candle range, and place a percentage trailing stop that fits your money management plan, because you never know what’s going to happen with chicken prices. They’re crazy.

The S&P 500 index was down this week about one percent and is about one percent higher on the year. On the weekly timeframe the major averages remain in a primary uptrend, although there is the increased possibility of a pullback and test of the March lows. 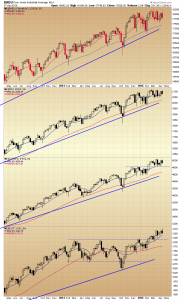 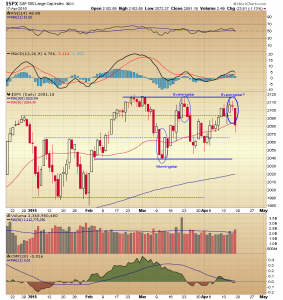 In a Friday post, I noted a potential eveningstar formation on the daily S&P 500 chart. The validity of the pattern is unimportant at this point, the chart is clearly damaged and will require technical repair next week. There was a weak bounce off the lows in Friday’s session, but the close remained below the 50 day moving average and on volume that was about 11% greater than the 50 day moving average of volume. The first level of support is the 2065 area which acted as important resistance in January and February, and below that is the channel bottom. 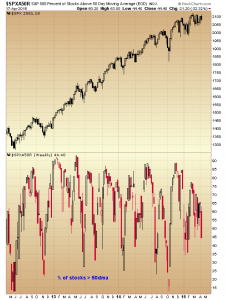 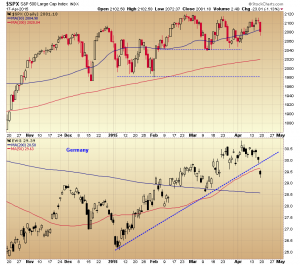 Much of the blame for the steep sell-off in the our markets on Friday was attributed to Europe, and specifically the German stock market. The Germany iShares (EWG) fund gapped open and below the uptrend line that delineated its strong rally this year and its 50day moving average. It did manage to close near center range on the day and looks like it might have formed a small hammer candle. The significance of a hammer candle is greater if it forms around some level of support which is not the case on this chart.

So, there is work to be done next week as the market continues to digest earnings, and while it doesn’t look like we’ll be making new highs in the immediate future, a retest of the channel low, if it were to occur, is only another two percent lower.

The bearish divergence in the stock price of Berkshire Hathaway (BRK/B) and the S&P 500 index may have been a caution flag. The stock year-to-date is down 6% while the index is up one percent. On the weekly chart, the price momentum indicators began to decline early in the year and last month Chaikin Money Flow entered negative territory. Berkshire shares are crossing below their 40 week (200 day) moving average for the first time since the beginning of 2014, and the next level of support is the long term uptrend line, currently in the $135.00 area. 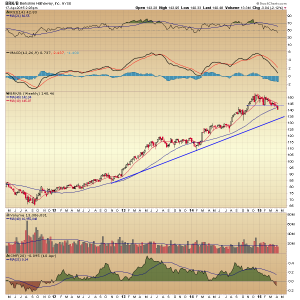 There is a lot of talk today about the weakness in Germany as the catalyst for the downdraft in our markets. Here is a chart of the iShares Germany Fund (EWG) for reference. It gapped below the uptrend line that has supported its strong year-to-date advance, and has breached the 50 day moving average. 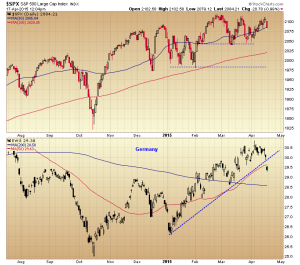 The S&P 500 index continues to move within a trading channel. In March, the bottom of the range was established by the formation of a morningstar pattern on the daily chart. This is a three-period bullish reversal pattern defined by a large dark candle, a narrow opening and closing range day, and completed by a large white candle. It represents transition from bearishness to bullishness. The top end of the channel was confirmed in early April by a eveningstar reversal formation. This formation is the reverse of the morningstar and represents a transition from bullishness to bearishness.
At this point in today’s trading and it is of course very early in the session, there is the potential for another eveningstar on the daily chart. The pattern would be negated by a bounce off the 50 day moving average, which was tested and has held so far, and a close in mid-to-upper candle range. 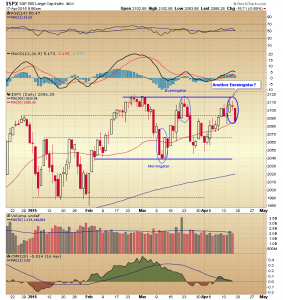 After Starbucks (SBUX) made a new high in February, the MacD began moving in bearish divergence to price and the Money Flow Index crossed below the 21 period average of the indicator that I use as a signal line. The following month the MFI crossed below its centerline, reflecting distribution. A bearish engulfing candle formed on the Starbucks (SBUX) chart in yesterday’s session, and it looks like the stock could test the lower end of a potential widening top pattern and its 50 day moving average. While the RSI and Stochastics (not shown) are not in oversold conditions, the 50 day moving average has diverted from the 200 day average to a level not seen since late 2013, when the stock was trading near $40.00. It then pulled back about 15% to its April 2014 low, as the 50 day average reverted back to the 200 day average. 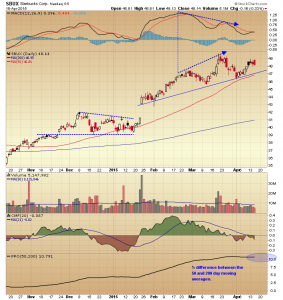