A reader requested a look at the Apple (AAPL) chart.

The weekly chart is a thing of beauty, highlighting a series of higher lows and higher highs. In between uptrending periods are clearly defined horizontal channel consolidations. The stock price is reverting around its 50 day moving average, and above its 200 day average and an uptrend line drawn off the 2014 and 2015 lows. The only negative is volume, which has been declining for the last couple of years, as reflected by the 50 day moving average of volume. Positive money flow dropped off this year, as well, with Chaikin Money Flow moving below the 21 period average of the indicator that I use as a signal line, and continuing lower. 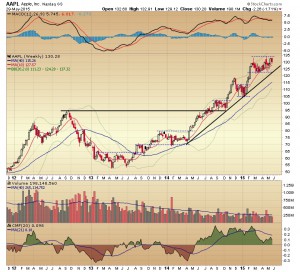 There is some interesting price action to note on the daily chart. Large dark candles formed at the March and April highs, which were followed by moderate pullbacks whose lows defined a three month support line. This week another large bearish engulfing candle formed, and it encompasses the prior and last week’s total ranges. A bearish eveningstar candlestick pattern finished out the action this week. An eveningstar is a three day reversal pattern, that is made up of a large white candle, followed by a narrow opening and closing “doji” candle (in this case a gravestone doji with the opening and closing range near the upper end of the overall range), and completed by a large dark candle.
It represents a transition from bullishness to bearishness, and is often seen at important tops. If there is continued weakness it is likely the 50 day moving average is tested and potentially the support line. This could be a part of another healthy reversion, however if trend support is taken out, there may be talk of a triple top. It’s a little early, however, to start making those predictions about a stock that could just as easily take out its February and April highs, effectively breaking out of the weekly consolidation range, and potentially powering on to new all time levels.

Let’s take a look at the major indices on multiple timeframes starting with the monthly view. These charts are, for the most part, picture perfect examples of uptrending markets, with the 13 period moving averages tracking higher and above the 21 period averages. One small issue on the S&P 500 and DJIA charts is the high wick candles that formed in April and May. They represent an inability to hold the new highs. Looking back over time and putting this action in perspective, however, they don’t appear that serious. 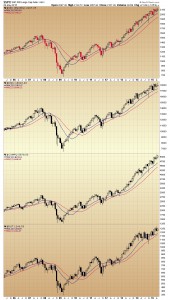 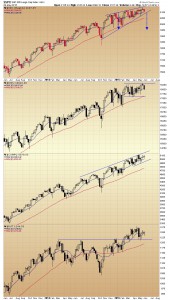 The weekly charts bring a little more detail to the technical picture. A rising triangle pattern may be forming on the S&P chart, as range contracts between converging support and resistance lines. These types of triangles usually resolve to the downside and in the case of the S&P index, the pattern projects a target in the 1950 area. The DOW bumped up against its March high last week and pulled back this week, and the NAZ which has lagged the previous two indices a bit recently, formed a doji star, or narrow opening and closing range candle this week, a sign of indecision. In 2014, the Russell consolidated below the 1212 area, then broke above that resistance in February of this year and continued higher into April. It pulled back to test resistance-turned-support last month and, so far, the bounce off that level has failed to advance past the 10 week (50 day moving average) moving average. 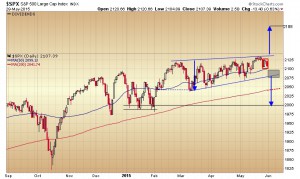 Focusing in on the daily S&P chart, a bearish eveningstar reversal pattern appeared over the last three sessions (I outlined the implications of the pattern yesterday), within the confines the more defined rising triangle. Any continued weakness likely penetrates the 50 day average and then could retest the pattern uptrend line. If, and this is getting ahead of the action, there was a serious breach of triangle support, the pattern projects through the 200 day average, back to this year’s lows. On the other hand, a breakout projects to the 2188 area.
The long, intermediate and short term trends remain higher, but, as you can see, if you search hard enough there are small fissures in the bedrock. The beauty part is these minor fault lines define clear areas of support, and should alert us to any serious seismic disturbance.

An eveningstar candlestick pattern has formed on the daily S&P 500 index chart. This is a three-day bearish reversal pattern that consists of a large white up day, followed by a narrow opening and closing range “doji” candle (in this case, a gravestone doji with the opening and closing range at the top of the overall range), and completed by a large dark down day. It represents a transition from bullishness to bearishness and is often seen at important tops.
Like any candle pattern it requires confirmation, but it is a caution flag.

The transports are breaking below the base support line of a large triangle top pattern on the weekly chart, and the 10 week (50 day) moving average is crossing below the 40 week (200 day) average. 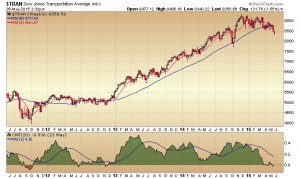 The Germany iShares (EWG) fund has been unable to make a new closing high this month, and diverged from the S&P 500 in Friday’s session, down more than a percent lower than the U.S. index. There has been a close correlation between the German and U.S. markets, a symbiotic relationship that requires the support of one for the other. The EWG has to recover and take out and close above the $30.62 level for the S&P to maintain its momentum. 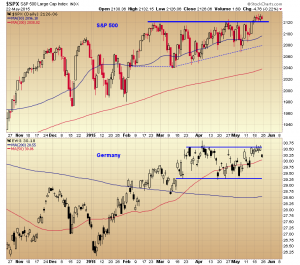 Let’s keep the analysis simple: the breakout came on weak volume and it looks like the index will be retesting resistance-turned-support. So, watch 2120 as support but keep an eye on 2135 as resistance, and be skeptical until volume improves (and even then be skeptical). 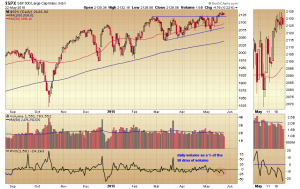 General Electric (GE) shares have underperformed relative to the S&P 500 index for the last three years. Year-to-date, however, GE is lighting it up with a 10.5% return on investment compared to a 3.2% return in the index.

The long term chart shows the drop that followed the dot-com bubble, followed by a return to the 2007 high, which happened to be 62% Fibonacci retracement of the 2000 and 2003 range. The 2008 crash delivered a greater percentage loss that the previous decline but the stock climbed back off its 2009 low, and in 2013 broke above the downtrend line drawn off the 2000 and 2007 highs. Since then, however, it has been moving in a horizontal channel bordered by the 50% and 62% retracement levels of the 2001 and 2009 range. That is, until last month, when the stock gapped higher and broke above the channel top. 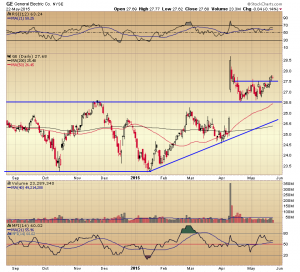 After punching through that resistance it pulled back and retested the $26.50 area, and in the process, formed a smaller secondary channel. Secondary channel resistance was penetrated this week. The 50 day moving average has crossed above the 200 day, and price and money flow momentum indicators are all trending higher and above their centerlines.
Well defined price action is healthy price action, and the stock looks like it wants to continue higher. 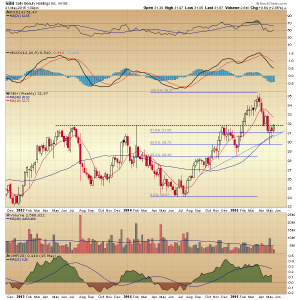 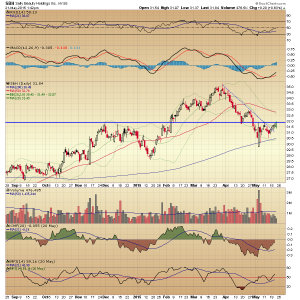 “Go Away!” The warning from the China navy to the U.S. surveillance plane flying over a “fake” or man-made China island may good advice for investors in their, as some believe, “fake” or manipulated stock market. At least, “Take some profit!” is an appropriate admonition.

The Shanghai Stock Exchange Composite Index ($SSEC) and the Hong Kong Hang Seng Index ($HSI) have had spectacular gains this year, up 37% and 17% respectively, but it might be prudent to take some profit at this point in time.

The chart of the Shanghai Composite shows the index breaking above a five year downtrend line in June last year, and then going parabolic. It is currently at a 62% retracement of its 2007 and 2009 range. Could it continue higher? Sure, and taking some profit early this year as it was consolidating around the 38% Fibonacci level would have made sense, too. It went higher…you could have bought back in or not.

The Hang Seng chart shows what could be the formation of a head and shoulders top. Watch the movement around the right shoulder. That is simple enough.

If you are skeptical about the fundamentals of the China stock market, monitor the technicals and the chart action carefully, they may be issuing a warning.

This is a weekly chart but McDonalds (MCD) is up 2.7% today, taking the stock price above the top end of a large one year channel pattern. It remains to be seen if the weekly candle can hold and close above this level going into the end of the week, but considering all the talk about how the company has lost focus (the fries are still great), the move in the stock price this year has been surprising.