Mike asked me to take a look at the Buffalo Wild Wings (BWLD) chart. The last time he requested my technical take was on El Pollo Loco (LOLO), so he obviously enjoys his chicken. 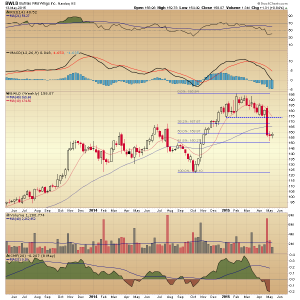 Shares of BWLD fell sharply last month after an earnings report and an increase in chicken prices. The drop was telegraphed by a bearish crossover on the weekly MacD, and the RSI and Chaikin money flow indicators crossing below their 21 period averages, and confirmed by a break below horizontal support in the $174.00 area. It penetrated its 40 week (200 day) moving average and is attempting to find some footing near $155.00 and the 62% Fibonacci retracement level of its 2014 and 2015 range. 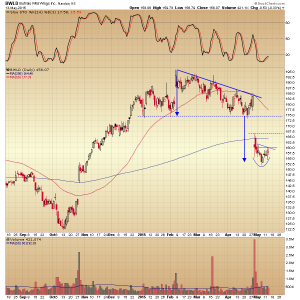 A deeply oversold condition, as measured by the Stochastics indicator, can be seen on the daily chart. The recent decline in the stock price measures out to the projected breakdown target of a rudimentary triangle pattern that formed over the prior three months, and the attempt to hold this month’s low has the characteristics of a small head and shoulders bottom. There is a lot of resistance overhead: the $160.00 neckline, 200 day moving average, and the gap, but, on the fundamental side, the stock did receive several valuation upgrades after the sell-off.

Meanwhile, a potential morningstar reversal pattern could be forming on the weekly LOCO chart. This is still a work in progress because the week is not over and the last leg of three period process is not complete. The $28.00 level remains key resistance and the uptrend line drawn off this year’s lows is still key support. 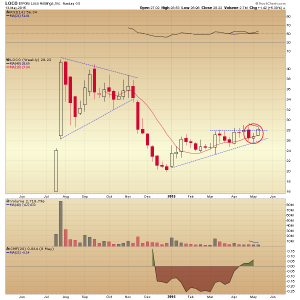