The ProShares UltraShort 20+ Year Treasury (TBT) fund is testing the rim line of a cup and handle formation that formed on the weekly chart over the last seven months. A successful break projects a pattern price target into the $57.50 to $58.50 area, which is the former bottom end of a consolidation channel that formed in 2012 and 2013. In May of 2013, the fund bounced off channel support and continued higher, breaking above the channel top and rallying to a perfect pattern price projection. The current technical status of the TBT is very similar to the one in 2013 before the rally: price is breaking or preparing to break out of a consolidation pattern, and volume and money are improving. Remember, however, that this week’s candle has three more days left to mature. 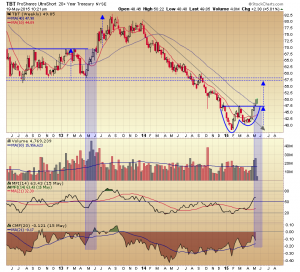