A reader asked if I would take a look at the Netflix chart:

The weekly chart shows the stock moving in a wide horizontal channel for about a year before breaking resistance in April, and rallying to just above the pattern price target projection. It’s oversold as reflected in the reading on the relative strength index (RSI) but money flow is still very positive, as reflected by the volume-weighted money flow index (MFI). Of note on this chart, are the two high wick candles that formed over the last two periods; they reflect an in ability to sustain higher price. 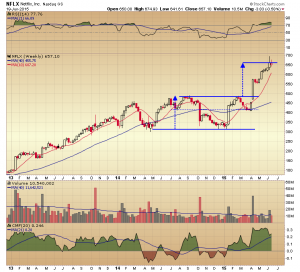 On the daily chart a large bearish engulfing candle formed in the last session, encompassing the entire range of the previous three trading days. The RSI is breaking below its overbought level, the MFI is headed down towards its centerline, and Chaikin money flow has dropped below its 21 period signal line, but is still in positive territory. It’s hard to say anything negative about this stock, which is a trader favorite and been on a tear since the beginning of the year, but the price action and these technical indicators bear monitoring. 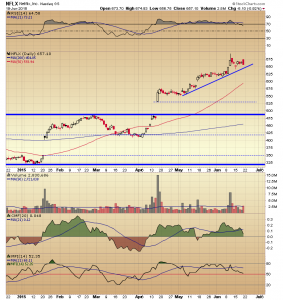 On Monday the DJIA closed below where it began the year. In that session the major indices tested key levels of either horizontal or ascending trend line support. The tests were successful and the indices went on a tear for the next three days, with the week’s high to low range on the DOW and the S&P measuring about 2.5%, and over 3% for the NAZ and the Russell 2000 index. Friday we saw the “healthy” pullback that’s required after a sharp move higher. It was healthy in the sense that the S&P dropped half a percent and volume was about 36% greater than the 50 day moving average of volume, the largest volume move since March. I don’t like retests of descending trend lines, like the ones on the DOW and the S&P, they invite lower prices, unlike horizontal trend lines which stabilize them. These indices need to recover quickly and take out last week’s highs. A protracted readjustment on these charts will be a drag on the NAZ and the Russell, the indices that have been supplied leadership.
On the weekly charts the Russell and the NASDAQ formed large white candles and continue to track higher. The DOW closed near mid-candle range and in mid-channel range, while the S&P 500 initially dropped below the uptrend line of its rising triangle, but managed to close back inside the pattern border.
Ideally we see the same action next week that we saw this week. That is, early weakness and then further strength, but maybe this time right into the close on Friday afternoon. 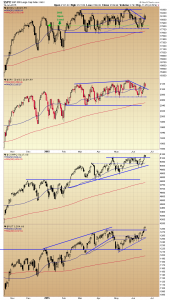 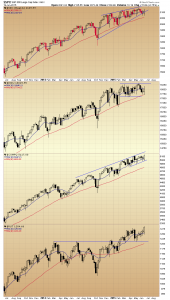 If you were looking for a modest pullback after a strong week of trading, you got it. The DJIA, the S&P 500 index, and the NASDAQ Composite have pulled back to or just above previous resistance and moving average support, while the Russell 200 index was flat. Volatility perked up with the VIX up 5% today. I’ll have more on the indices on multiple timeframes, over the weekend. 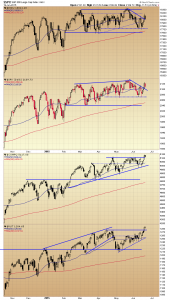 Copper continues its textbook channel decline, returning again to the 62% retracement of the 2009 low and the 2011 high.

This level was tested earlier in the year when it intersected with the channel support line, and a morningstar pattern formed sending price back up to retest the channel top. This time the retracement level does not have the reinforcement of channel support and looks more vulnerable, but if it were to hold, a higher low would be established, which is a first step on the road to recovery.

The reading on the ratio-adjusted McClellan Oscillator, and the number of stocks in the S&P 500 index that are above their 50 day moving averages, both look moderate and these indicators suggest this week’s rally has more room to run. 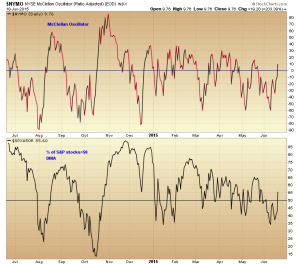 Volume on the SPY was about 50% greater than the 50 day moving average of volume. 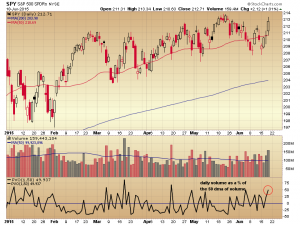 There is not much commentary required: the Russell 2000 and the NASDAQ make new closing highs, and the DJIA and the S&P 500 index broke through their 50 day moving averages and June downtrend lines. Good looking charts. 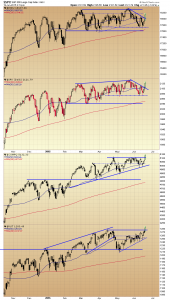 While the S&P 500 met resistance at its 50 day moving average forming yet another indecisive narrow opening and closing range candle, the iShares Germany (EWG) fund, my proxy for all things Greece and Europe, held above its 200 day average and formed a bullish hammer candle. This candle follows two previous large white body candles, all holding above the key average and the 50% retracement level of the 2015 range. If this level holds and the EWG is able to advance from here, it will release a lot of tension in of our market.
As I noted after yesterday’s session, the transports which have been a drag on the broader market recently, look like they are attempting to form a triple bottom. They have a history of triple bottom try’s but, as I said, maybe the third time is the charm. Again, positive momentum in this sector reinforces the same in the broader averages.
Finally, the Biotech iShares (IBB) fund continues to hold in a horizontal channel above the rising 200 day moving average. Shares bounced off the channel bottom at the beginning of the week and tested the channel top end yesterday. This chart looks prepared to breakout and acceleration in this already hot sector, could improve momentum in the broader market. 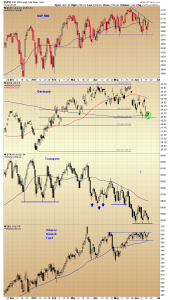 The Dow Jones Transportation Average has been a drag on the broader market, but there may be a signal that it is attempting to stabilize. The daily chart shows a three month period in late December 2014 to February of this year, when the average formed a triple bottom in the 8600 area. This process was accompanied by a rising Chaikin money flow reading. A second triple bottom formed around the same level in late March and early April, again accompanied by a rising money flow indicator. The index may be trying to put in another triple bottom and there is improving Chaikin money flow. The rallies off the previous triple bottoms were not sustained, but maybe the third time is the charm. 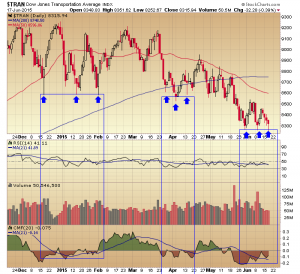 There is an interesting juxtaposition of moving average support and resistance on the S&P 500 index chart and the iShares Germany (EWG) charts, which is my proxy for the state of Greek affairs. The S&P is backing off from its 50 day moving average, and the EWG, which had previously been supported by its 200 day moving average is, for the moment, breaking below it. 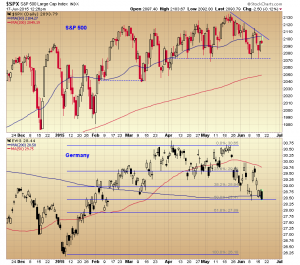