Yesterday’s strong intraday reversal formed what at first glance appear to be hammer candles on the major market index charts. These candles are considered bullish reversal indicators, but after closer inspection they may in fact be, hanging man candles. The hanging man is very similar to the hammer but the real body or opening and closing range is generally narrow and situated at the very top of the overall range. They are considered bearish reversal candles when they form near significant highs. In this case they have formed closer to important support which suggests the text book hammer interpretation. The very narrow real range on the S&P 500, DJIA and Russell 2000 charts and the long lower shadows, however, have a tenuous and fragile look to them, which is not indicative of “hammer-like” stability. Technical analysis is an art and ultimately the integrity of the March horizontal support lines will resolve the candle conundrum. 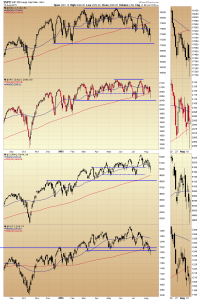