The support levels that defined the bottom end of the consolidation ranges the major market indices have been trading in for most of the year were taken out to some degree or another in today’s session, and new lows are in place on these charts. As the dynamic of lower highs and lower lows continues it becomes less likely there will be a V-shaped bounce and rapid retest of the highs, many have come to expect from this market. 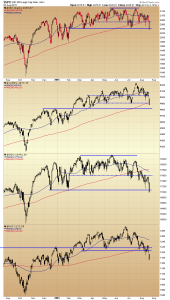 SPY volume was 73% greater than its 50 day moving average of volume. The last time there was a spike like this was at the end of June, just before the July lows were established, which helped define channel support. 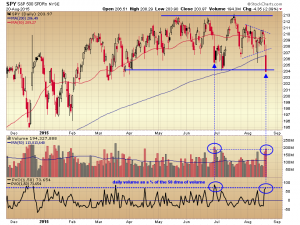 One thought on “Index Chart Follow-Up”