Short term: the 5, 10, and 20 day moving averages are trending down, but a bullish morningstar reversal pattern has formed on the daily chart in the area of the August low.

Intermediate term: the 50 day moving average is trending down, but a bullish hammer candle formed on the weekly chart at a key technical support level.

Long term: the 150 and 200 day moving averages are trending down, the index has crossed below a long term uptrend line, and the MacD made a bearish crossover.

A bullish morningstar reversal pattern formed on the S&P 500 daily chart. This is a three period candle pattern that consists of a large dark down candle, followed by a narrow opening and closing range doji candle, and completed by a large white rising candle. It represents a transition from bearishness to bullishness and is of particular importance when it forms at key technical levels, like the August low.

Three eveningstar patterns formed over the last month (bearish reversal patterns) while the index was moving higher in what developed into a rising triangle, the last eveningstar signaling the break below the triangle uptrend line which initiated the return to the August low area. The frequency of the formation of these particular bearish and bullish reversal patterns reflects the uncertainty in the market, and all candle formations require confirmation in the form of follow-through action, but the importance of the 1870 level has been reinforced. If it fails it would be a significant bearish breakdown, if the broader market is able to rally next week, it could embolden bullish sentiment, and start the conversation about a double bottom.

Thanks to Jim Cramer for the opportunity to go “Off The Charts” on Mad Money last night.

We noted a divergence between the 3M Company (MMM) and the Dow Jones Industrial Average in June and the bearish scenario has played out. Today, however, 3M shares are up over 2.5% and a look at the weekly chart shows how they are trying to hold just above the October 2014 lows. If they could stabilize at this level it would be a good sign for the broader market because of the historic correlation between the stock and the index. The money flow index at the bottom of the chart is a volume-weighted measure of money flow, and it is in extremely oversold condition, which suggests that the 3M sellers may be exhausted.

There may be bullish opportunities over the short term but ultimately for this market to return to trend the FANG stocks, Facebook (FB), Amazon (AMZN), Netflix (NFLX), and Google (GOOGL), have to recapture their 50 day moving averages.

The futures are up this morning and now the questions are: Will there be a bounce? If so, what will be the magnitude and duration of the move? Would a bounce be sold or could it gain momentum and establish a higher low on the major market index charts?
These questions will be easy to answer in about a month, but in the meantime watch the charts for clues. After sharp prolonged moves oscillators get pinned in overbought or oversold zones and indicators that use an averages of their data, take time to catch-up to the real-time price action. Price action, then, around previous areas of supply and demand becomes the primary technical tool. This limits the amount of information traders have to make decisions and so, times like these require additional levels of caution and patience.
I’m looking at the 20 day moving average centerline on the Dow Jones Industrial Average chart and the 5900 area, where the first eveningstar pattern formed this month, as important upside levels for the index.

The penetration of the triangle uptrend line last week was the trigger that initiated a move in the major averages back down near last month’s “flash” lows; in fact, the Russell 2000 index has dropped below its August low. 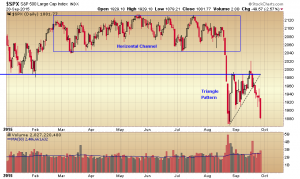 These charts have not looked healthy since the horizontal support lines were broken and now it looks like the attempt at a bounce and a “V” shaped bottom has failed and the indices are headed lower. What is particularly worrisome, with just two trading days left in September, is the trend line break on the monthly chart and the bearish MacD crossover.

The Germany iShares (EWG) and the S&P 500 are generally a well correlated ETF and index. This year, however, the EWG began to roll over even as the S&P continued to move horizontally within a consolidation channel. It appears that the EWG was sending a bearish signal, and I noted the possibility here and here.
As we stand now, there has been a lot of discussion about whether the S&P is setting up to retest its August low. The EWG has done that and more, moving back down today to its October 2014 low, and it remains to be proven over time if it will lead the S&P index lower.

Here’s a link to my Amazon article this morning on TheStreet.com.

This is a link to my Facebook analysis (FB) posted this morning on TheStreet.com. 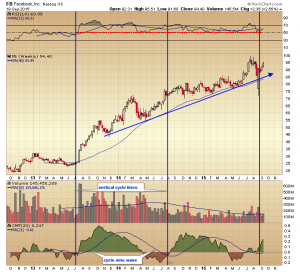