We’ve all become familiar with the triangle pattern that formed on the S&P 500 chart over the last month. Friday’s range touched resistance and closed on support, and now the integrity of the uptrend line looks to be in jeopardy. An eveningstar pattern has formed on this chart again, similar to the one that helped establish the horizontal resistance level, after the bounce off the August lows. The eveningstar is a reversal formation that develops over three days and reflects a transition from bullishness-to-bearishness. The first eveningstar was followed by a large down day, but did not lead to further selling. In fact, a second eveningstar pattern formed below the first, and it was followed by a strong up day. 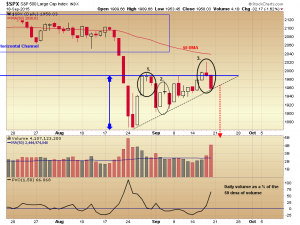 The current pattern looks more ominous than the first two because of Friday’s negative volume. It was 66% greater than the 50 day moving average of volume. A breakdown at this point suggests a retest of the August low. On the other hand, this last eveningstar may be more like the second and support could hold and the index make another attempt to break above resistance. Watch the range.