The Germany iShares (EWG) and the S&P 500 are generally a well correlated ETF and index. This year, however, the EWG began to roll over even as the S&P continued to move horizontally within a consolidation channel. It appears that the EWG was sending a bearish signal, and I noted the possibility here and here.
As we stand now, there has been a lot of discussion about whether the S&P is setting up to retest its August low. The EWG has done that and more, moving back down today to its October 2014 low, and it remains to be proven over time if it will lead the S&P index lower. 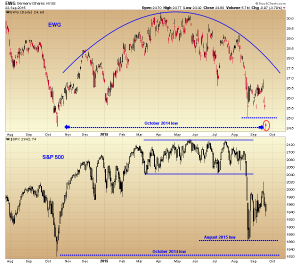