A reader asked if I’d take a look at the Microsoft (MSFT) chart:

The weekly timeframe shows the stock in rally mode from the beginning of 2013 to the end of 2014, at which point it began moving in a wide horizontal channel pattern. Top end resistance is in the $48.50 area and the bottom end $39.25 support level is also a 38% Fibonacci retracement of the two year rally. The August drop saw the stock test channel support but it quickly moved back into midrange and above both its 50 and 200 day moving averages. 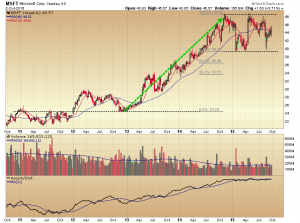 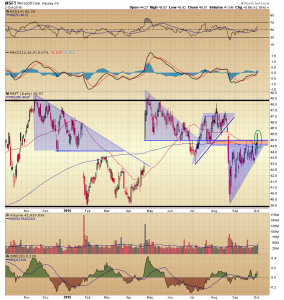 A series of triangle consolidations can be seen on the daily chart within the borders of the large weekly channel consolidation. Friday’s 2% jump in price saw Mr. Softee pierce through a zone of resistance delineated by current triangle resistance and former triangle support. The relative strength index (RSI) and moving average convergence/divergence (MacD) have been tracking higher since the August low and are above their centerlines, reflecting positive price and short term trend momentum. Chaikin money flow (CMF) at the bottom of the chart is a 21 period average of accumulation/distribution, and is above its centerline indicating buying interest at this level. The stock looks like it has built a platform from which to move higher and a clearly defined stop loss zone.