The Russell 2000 index ($RUT) is pulling back today from a retest of resistance, action that closely resembles what we’re seeing in the Transportation average. Earlier in the week, I noted the morningstar pattern on the Russell weekly chart and suggested it was preparing to catch-up to the other major indices, all it had to do was break above resistance to set that dynamic in motion. Looking at the Russell 2000 iShares (IWM) ETF we see no attempt to traverse the resistance line, instead it reversed and is testing the support line of the narrow channel it has been trading in for about the last three weeks. 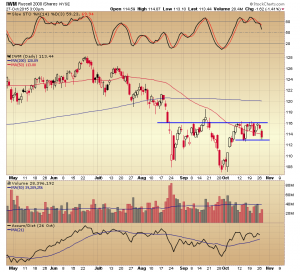