The momentum this month in the broader market has been powerful and has laid waste to several key resistance levels. In yesterday’s session the major averages were all up over one percent but the Russell 2000 index, the underperformer until now was the clear outperformer, with a gain of nearly three percent. 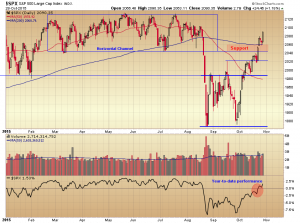 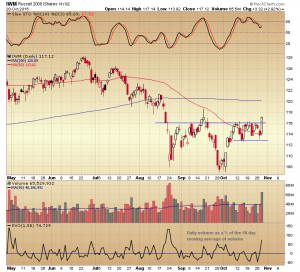 The daily chart of the Russell 2000 iShares (IWM) shows the ETF breaking out of the narrow consolidation range it had been trading in for the last few weeks, on volume that was 74% greater than the 50 day moving average of volume. It is important to the health of the rally that the small caps participate along with the broader indices.
It is also important, based on Dow Theory that the transports engage as well, and they are lagging at this point in time. The chart shows the Transportation Average ($TRAN) testing the bottom end of a small channel similar to the one on the Russell chart. 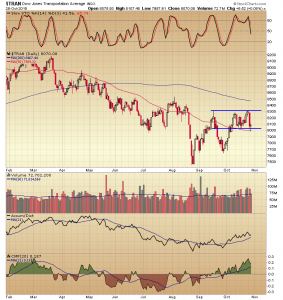 Also, keep an eye on the Germany iShares (EWG) ETF, it formed a narrow opening and closing range or doji star candle in yesterday’s session, which often suggests that the current action is under consideration, and these candles sometimes form at reversal points. The news this morning from Deutsche Bank that it is reducing its workforce by 35,000 and closing its operations ten countries is not getting the attention it should on CNBC.