The S&P 500 SPDR (SPY) broke above its 150 day moving average last week and this week is testing key technical resistance. A break above this level would be extremely bullish, but it should be noted that volume has been declining going into this test. The graph at the bottom of the chart reflects daily volume as a percent of the 50 day average of volume, and today it was 45% lower than the average. 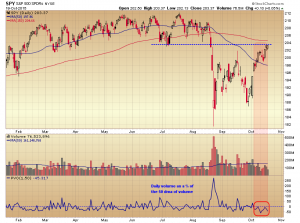 Here is a link to my article on Thermo Fisher (TMO) posted on The Street.com this morning.

Sure, Netflix has outperformed Nike by 48% year-to-date but since August things have changed, and the athletic footwear and sports accessories company outperformed the internet television service by 31%. So, in keeping with the fickle and mercurial nature of the stock acronym game, I suggest we eject Netflix from the FANG group and replace it with Nike. 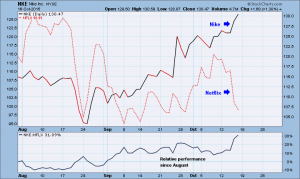 As the S&P 500 and Nasdaq Composite indices bullishly retest the failed support levels that initiated their August declines, the Russell 2000 is lagging, encountering resistance at a downtrend line drawn off the highs since July and its 50 day moving average. 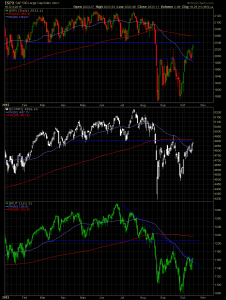 The DJIA was up one half of one percent on Friday, but the transportation average returned to a downtrend line drawn off the declining highs since March and reversed finishing down 1.58% in the session. A minor divergence but one to watch as the major market indices test resistance after a sharp two week rally. 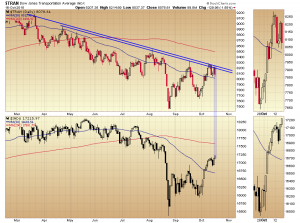 Here is a link to my article on PayPal (PYPL) posted this morning on TheStreet.com. 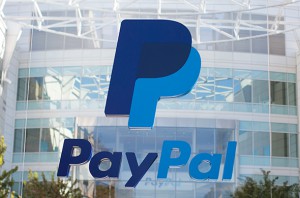 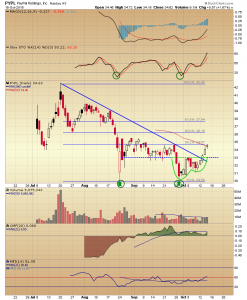 The S&P traded back to the top of the resistance zone delineated by the September doji high and the 50 day moving average. After yesterday’s close it looked more likely the lower end of the range would be tested today, but that was not the case, with the market making a fierce advance after closing an opening gap. The weekly close is always significant and tomorrow’s will be particularly so, because it will either confirm a breakout above resistance with strong bullish implications, or reflect an inability to produce follow-through strength and reinforce the skepticism associated with the rally within the range. 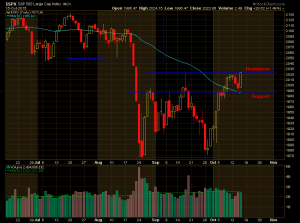 Technicians use past price action to try and determine future price action. Sometimes they identify patterns that help them to interpret the message of the market, but many times the same message is delivered in a more subtle way.
In August and September eveningstar patterns formed on the S&P 500 chart which helped define trading channel resistance. These three-day candle reversal patterns consist of a large white “up” candle, followed by a narrow opening and closing range “neutral” candle, and completed by a large “down” candle. They represent an orderly transition from bullishness-to a neutral condition-to bearishness. 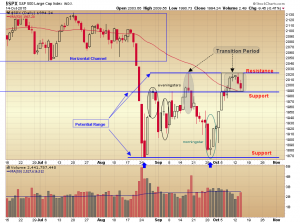 In the last five trading sessions there has been another orderly readjustment that appears at this point to represent another bullish-to-bearish transition. A large white candle formed on Friday above the 50 day moving average. It was followed by two narrow range days that formed near the upper end of the September eveningstar doji high, and they were followed by two medium range down days. This is not a classic eveningstar pattern, but on closer observation suggests the intent of the reversal pattern and sends a similar message.
The integrity of the well-defined support and resistance levels, however, should be the final determining factor.

As previously posted on TheStreet today:

The decline in Wal-Mart (WMT) shares today is the acceleration of a continuing trend in the stock price. Shares are down sharply today and they have lost 27% since January. The move lower began in earnest when the 10-week (50-day) moving average crossed below the 40-week (200-day) average and the $77.50 support level was broken. There was an attempt to hold the next level of support in the key $70 area, but it was taken out and former October/December 2012 low support subsequently evaporated this morning. 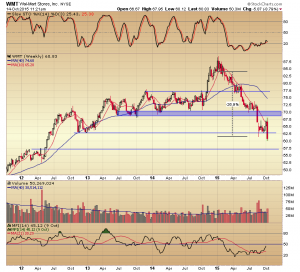 If shares were able to bounce and recapture the $62.50 level that might be considered a base, and for those who think the selloff was overdone, it’s a platform for a speculative trade. There had been recent interest in the stock, as reflected in the bullish stochastic divergence and the move in the money flow index above its 21-period average.

The Power Shares US Dollar Index Bullish Fund (UUP) has been making a series of lower highs above horizontal support this year and in the process formed a large triangle pattern on the weekly chart. It is once again testing the $24.50 support level.
The relative strength index continues to track lower, below its declining 21 period average and centerline, and the money flow index, a volume-weighted relative strength measure is below its centerline and 21 period average. 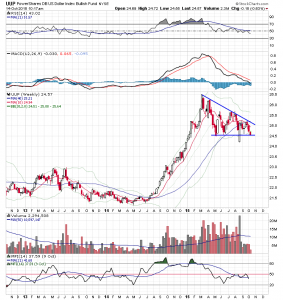