The stochastic oscillator has been particularly accurate over the last several months signaling short term shifts in the direction of the S&P 500 500. (Here and Here) These changes in direction usually follow a crossover on the oscillator and move out of either an overbought or oversold condition. 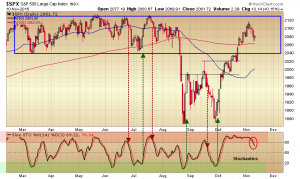 At the end of October there was a bullish crossover and a move up and out of an oversold condition. The index rallied and the oscillator quickly entered an overbought condition, remaining above the 80 level as the advance in the index continued for several weeks. The broader market pulled back last week and stochastics have made a bearish crossover and moved below the 80 level and out of an overbought condition. This action would suggest that the S&P has some more downside.
In Tuesday’s session a small hammer candle formed above the 50 day moving average and this would be a logical area for a pause. A strong bounce, however, could move the stochastic oscillator back into an overbought condition, but in either case it should continue to be an effective tool for traders with a swing time frame.

One thought on “Continue to Watch the Stochastic Oscillator”