The close in the S&P 500 index last Friday was on the low and just above the September high support level which, followed by the events in Paris over the weekend, suggested a breach of support and a lower open on Monday. That was not the case, and in fact the support line held and a large bullish engulfing candle formed which took the index back into the horizontal channel range it had been trading in earlier in the year. There was positive follow-through action in the Tuesday morning session, but after the index penetrated its 200 day moving average around noon, it quickly reversed direction closing near its low and creating a bearish high wick candle. The negative implications of Tuesday’s candle had no effect on Wednesday’s session and the broader market saw a strong rally and a close near the highs of the day. At this point in the trading week the S&P 500 index is positioned squarely in the center of the March through August channel range. 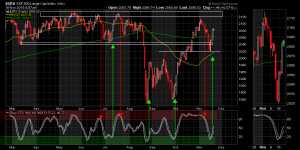