The stochastics oscillator on the daily chart of the S&P 500 has entered an overbought condition, and as I have been saying for some time: The stochastic oscillator has been particularly accurate over the last several months signaling short term shifts in the direction of the S&P 500 500. These changes in direction usually follow a crossover on the oscillator and a move out of either an overbought or oversold condition.
It is once again, attempting to make a bearish crossover in an overbought condition. This could change depending on today’s close and bounded oscillators can stay overbought or oversold for long periods, but it is a preliminary warning sign. 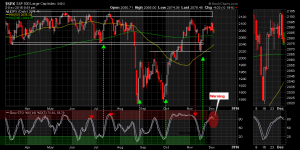